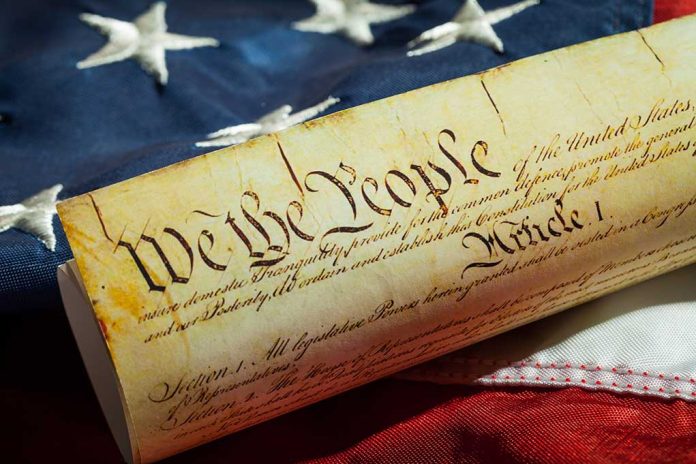 (RightWing.org) – Politicians want you to believe that their work is hard, demanding and that they earn every penny they get. Yet, how do members of Congress in their 80s do such demanding work? They don’t; most politicians are lazy and want maximum results for the least amount of effort. In fact, most don’t read the legislation they vote for, and they certainly don’t write it, as that’s what their legislative aides do. All the elected officials do is grumble and divide Americans.

Today’s Democratic Party isn’t the same party of 2016. It’s moved much further Left and put Centrists in an awkward position. For better or worse, they are the gatekeepers of liberty. In early 2021, the Left believed it would be simple to finish former President Barack Obama’s vision to fundamentally transform America. At the time, Democrats controlled Congress and the White House. Their attempt has failed, and for a good reason.

The framers never intended governmental processes to be easy or fast. They layered it with checks and balances that complicate the legislative process so politicians can’t do what Democrats are trying to do today.

Moderates Stand in the Gap for Better or Worse

There is no question that Sens. Joe Manchin (D-WV) and Kyrsten Sinema (D-AZ) are under an intense amount of pressure. The Left is trying to blow up the Constitution and is working overtime to pressure them to fall in line or face the consequences. On Tuesday, January 18, Sen. Joe Manchin (D-WV) doubled down as Senate Majority Leader Chuck Schumer (D-NY) tried to force Manchin to get in line.

Manchin told reporters that the majority of his Democratic colleagues changed their minds on the filibuster. He respects their point of view. He said for the umpteenth time that he hasn’t changed his view on the filibuster and will not vote to change its current form so that Democrats can run roughshod over the GOP. Democrats say they will primary him in 2024 when he’s up for re-election, but Manchin is comfortable enough in his skin to tell them to “bring it on.”

If one steps back and looks at the situation in the Democratic Party, Manchin is much like former Sen. John McCain (R-AZ) was to the GOP. They both march to the beat of their own drums and often infuriate members of their own party. Due to the political nature of West Virginia, Manchin is largely shielded from the influences of the national party or outside activists who are out of touch with red-state voters.

Government Is Not Supposed to Be Easy

Democrats need a simple majority to pass their radical agenda. It doesn’t matter if it’s the semi-socialist Build Back Better proposal or their phony election reform law. Unfortunately for them, Republicans can block legislation using the filibuster. Democrats say it’s arcane and draconian. They weren’t saying that a few years ago when Republicans controlled Congress and the White House. The same group trying to end the filibuster now said eradicating it amounted to a Constitutional crisis just a few years back. They were right then, they aren’t now.

James Madison wrote in Federalist 51 that if men were angels, government wouldn’t be necessary. If angels governed men, no controls on government would be needed. Therein lies the problem: politicians are corruptible, and the government can all too easily become oppressive. Our system of government is created with limits and controls and is rife with checks and balances to keep the worst impulses of politicians under control.

The filibuster is another check and balance on the House, which the framers designed to be passionate and feisty. The Senate is a different beast; it’s meant to cool things down and be more deliberative. Since 1806, the Senate required a supermajority to bring debate to a close in order to vote on legislation. So, almost our entire history, the Senate has had a supermajority rule in place.

In 1917, the Senate created Rule 22. They call it the cloture rule because one phrase for ending debate is invoking cloture. The process of doing so under that rule takes 60 votes. If you strip the 60 vote supermajority and make the Senate a simple majority rules body, it becomes a glorified House of Representatives where passion rules and oppression reigns unchecked.

So, Manchin and Sinema are on point in saying the filibuster is a long tradition of the Senate. It may have changed and morphed, but ultimately today’s form is good for checks and balances.

Don’t count it, but hope for it.