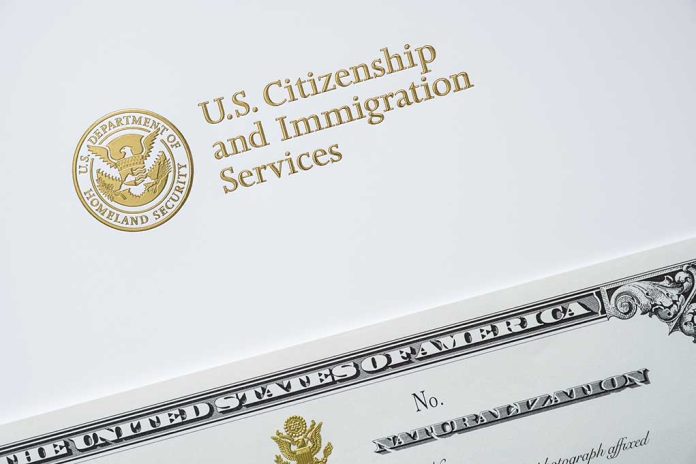 (RightWing.org) – Joe Biden is proving that he’s willing to go farther left than any Democrat in modern US history when it comes to illegal immigration. On January 20, Biden announced he was forwarding new legislation to Congress titled “The US Citizenship Act of 2021.” This week, Congress intends to introduce the legislation.

Biden says he wants to modernize the badly broken immigration system. However, his proposal only moderately modernizes the immigration system. In reality, it reduces the consequences of illegal immigration to virtually nothing, while giving incentive for more people to violate US sovereignty. It also punishes those who often spend tens of thousands of dollars in costs to come to America legally.

What’s in the Plan?

The key sticking point in the proposal is a fast-track to citizenship for 11 million illegal immigrants. It would offer a five-year temporary status and allow for citizenship after another three years. That’s an eight-year reward that conservatives won’t go for in Congress.

Politically, the bill is dead on arrival in the Senate as 60 votes will be needed in an evenly divided upper chamber. The Biden administration claims it knows the political realities and merely wants to jumpstart the conversation.

What’s This Really About?

This is about partisan politics. Right now, Democrats want the illusion of a bipartisan attempt at passing legislation. Once the GOP says no and tries to negotiate, Democrats will suggest that Republicans are partisan and they, once again, must go-it-alone to pass legislation they intended to do all along without the GOP.

So, what is the bill really about?

Politicians always think of themselves before the country. It’s in their nature and it’s how they maintain power. Democrats don’t want a deal. If they did, they would consider proving their intentions are noble. They believe that those who get citizenship will vote Democratic for decades to come as a favor for their newfound rights.

Instead of giving full citizenship rights, Congress could pass a law that provides for all legal rights of citizenship for 15 to 25 years, minus voting. At such a point, they would be granted full citizenship with the right to vote.

That guarantees fairness to the political process and could win bipartisan support as a result. It’s a win for everyone. It provides time for people to more fully assimilate into America without worrying about political issues or being used as a pawn by one political party for its own purposes.

Then, perhaps Democrats would consider what’s best for the nation and not their election bids.