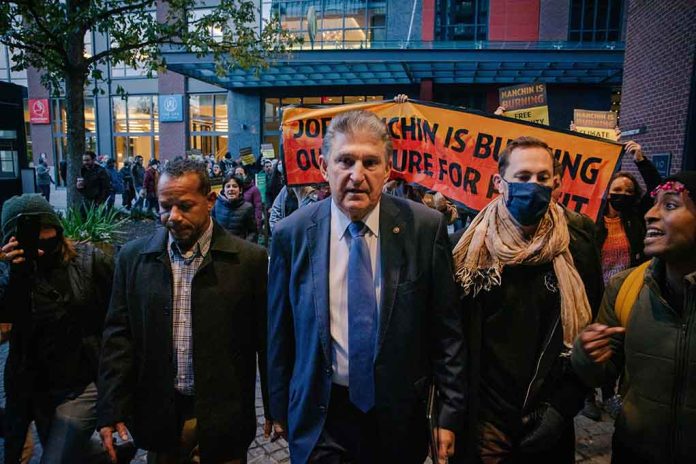 (RightWing.org) – Starting in the late 1990s and continuing even today, public schools created campaigns and programs to stop bullying. Similar to the war on drugs, the war on bullies was a massive failure. All the proof one needs is watching how Democrats behave after moderate Sen. Joe Manchin (D-WV) declared he would not vote for the Left’s Build Back Better semi-socialist climate change radical legislation.

On Sunday, December 19, Manchin stated without reservation that the $1.75 trillion legislation was dead. Predictably, Democrats and the media came out swinging. It was a radical departure from how they handled Manchin for most of 2021. So, instead of regrouping and acting like adults, Democrats seemed intent on bullying in hopes they could turn Manchin around. Will it work?

Democrats Line Up to Spank Manchin

After Manchin announced he would not vote to go along with Democrats to get along with them, they did what they’ve been best at for decades: bullying and lying. Now, Manchin’s learning what it feels like to be a Republican running against an out-of-control Democratic Party that will say and do anything to win.

After the West Virginian’s announcement, the Left came out swiftly and decisively. Socialist Democrat Bernie Sanders (I-VT) said Manchin doesn’t have the guts to vote for the bill. Nice try, Bernie. It’s not about guts voting for the bill; it’s about listening to his constituents. Manchin doesn’t work for Bernie or the Democratic Party. He works on behalf of his state, which is deep red, and he’s the only high-level elected Democrat left in the Mountain State.

Bernie was far from alone in his rhetoric. Rep. Ilhan Omar (D-MN) said he couldn’t be trusted and used expletives to express her anger at Manchin. Rep. Ayanna Pressley (D-MA) said he’s obstructing the president’s agenda, and Democrats can’t allow one Senator to do that, yet they have no choice. His vote is his vote, and no amount of bullying changes that reality. One by one, Democrats lined up to take their shots at Manchin.

Perhaps the biggest bully of them all was White House Press Secretary Jenn Psaki. In a harshly released statement, the White House all but accused Manchin of lying to President Joe Biden as she tore into him. She revealed that Manchin brought a revised Build Back Better bill to the president the senator said he could support, then suddenly dropped the announcement. Yet, she didn’t bother to tell America what Biden decided on Manchin’s revised bill or if Senate Democrats would get on board with it. For Manchin to declaratively state he’s a “no,” something happened we’re not being told.

Why Are the Democrats Intent on Attacking Manchin?

Manchin is what some might call an old-school blue dog Democrat. He comes from a conservative, hard-working, blue-collar state that doesn’t embrace the left-wing views of the Democratic Party. While Manchin isn’t a conservative in the manner Conservatives would like, he certainly is compared to his party.

Keep in mind, Manchin votes with Democrats over 90% of the time. Yet, in 2021, Manchin helped kill:

On Sunday, he said he couldn’t go along with the Democrats’ hopes of transforming America. It’s not difficult to understand the Left’s anger. This is as close as they will get to remaking America for a long time.

What did Democrats get for their overreach?

They are exposed. All the things Republicans said about Democrats for decades that they denied are now on full display. There’s no getting around it, and polls show voters are not prepared to go there with them.

So, will Manchin reward Democrats’ bullying and join them under an intense smear and pressure campaign? It’s unlikely, but in Washington, never say never, until never happens.