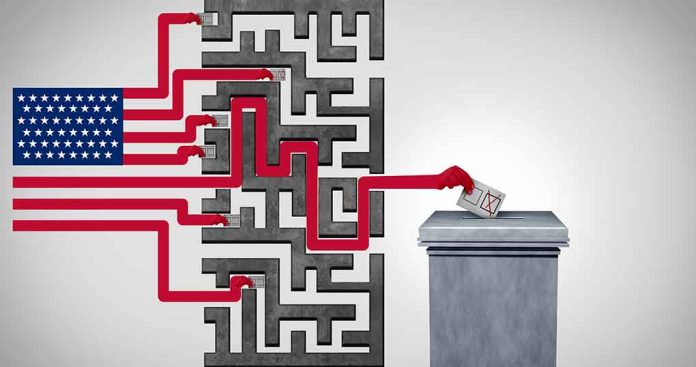 (RightWing.org) – In 2021, Democrats put America through the wringer. The Left loved the progressive attempt to shove the semi-socialist climate change Build Back Better proposal down America’s throat. While Democrats overplayed their hands and sidelined Republicans, Conservatives are temporarily relieved that two moderate Democratic Senators scuttled the legislative attempt to hijack America.

Eliminating the Filibuster Is Key to Democrats Agenda Success

It never matters which party is in control of the Senate. The filibuster empowers the minority party and frustrates the majority. For legislation to move through the Senate, the upper chamber rules require a 60 vote threshold to pass a bill. The filibuster is a tool that prevents Congress from creating instability in the economy and society from one election cycle to another as power changes hands between the parties.

It’s part of a tradition that dates back to the mid-1800s. The objective of the filibuster is to achieve the intended purpose of the Senate – force debate, build consensus, and ensure that small majorities don’t erode trust in the government by pushing through controversial legislation.

That’s no longer a concern to Democrats who want to push through controversial legislation. Standing in the way of a radical voter rights bill, DC statehood, court-packing, and the semi-socialist Build Back Better agenda are Republicans who refuse to give Democrats the needed 60 votes in an evenly divided Senate.

Unless the filibuster is eliminated or carved out to enable Democrats to cherry-pick legislation, the Democratic agenda is dead on arrival in the Senate.

In 2017, Schumer was in the same position as Republicans are today. Republicans used reconciliation to bypass Democrats to pass their massive tax cut program. At that time, Schumer said if the GOP couldn’t get 60 votes, they shouldn’t change the Senate rules. He was right then, and that sentiment is right now that he’s in charge and doesn’t have the voters to institute his far-left agenda. Standing in the way is a familiar foe – Democratic Sen. Joe Manchin (D-WV). Last June, the West Virginia moderate demanded Democrats work with Republicans and stated he was against overhauling the election system and ending the filibuster.

How often can Democrats bring their supposed voter rights legislation up for a vote? The effort failed three times due to unanimous GOP opposition. In the next several weeks, Schumer intends to manipulate the events of last January 6 to try and sway Senators to vote for a carve-out of the filibuster. It doesn’t have the support of Manchin. Without all 50 Democratic Senators, it won’t be possible. A carve-out allows the Senate to pass legislation on a straight-up majority vote.

That isn’t stopping Schumer from the insanity. The Democrats’ goal is to centralize election powers in Washington, DC. The legislation seeks to hamper states from reforming voter laws that protect ballot integrity while making voting more accessible.

The Honest Elections Project showed how the Democrats’ extreme proposal would have the opposite effect of making elections more secure. Instead, their rules would inject chaos into elections, create confusion, and drive a wider wedge between Americans.

Democrats aren’t fighting to improve the electoral process; that would hurt them and their chances. When you hear a Democrat talking about fairness, they mean they can’t win national elections unless they rig the rules in their favor — that’s their idea of fairness.

If you were expecting things to settle down in 2022 and for the looney ideas to go away, you’re going to be disappointed. Democrats didn’t learn a thing from the 2021 elections in Virginia, New Jersey, or local races around the country. They know what happened and what will likely come in the 2022 midterm elections. They are desperate and boxed into a corner.

There’s only one way to put a stop to it, and that’s to hope moderate Democrats take control until the GOP cavalry arrives in November. That’s not a sure recipe for success.