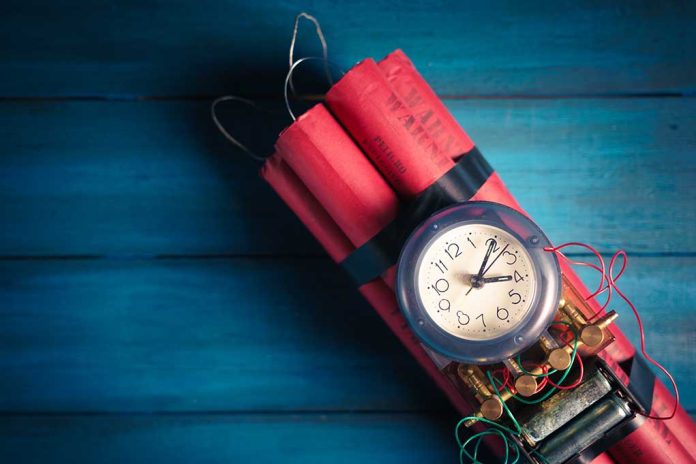 (RightWing.org) – Regardless of what side of the aisle one sits on, there’s only one narrative about the 117th Congress. Democrats overplayed their hand as they attempted to fundamentally transform America. It was entirely predictable. Since 2008, the Left has tried to seize control of America by virtually any political means necessary. Their exuberance to do big things was their Achilles’ heel.

It’s easy to misunderstand that doing big things doesn’t necessarily mean it’s the right thing. In 2020, Joe Biden and Democrats painted a picture that if elected, he would quiet down the political rhetoric, and peace and stability would reign in Washington, DC. If Biden faced the media that Trump did, his administration would likely be labeled the most hostile to the Constitution since the Civil War as lawlessness reigns supreme. Here’s the oddest part of it all: it’s Democrat on Democrat – far-left versus the left of center. On Thursday, January 13, the entire Democratic Party self-destructed.

House Speaker Nancy Pelosi (D-CA) has only a five-vote majority in the House. In the Senate, it’s even tighter due to an even split between Democrats and Republicans. For Democrats to get anything done, they must agree in total unity. The razor-thin margins make governing as the majority party more difficult than being in the minority, especially when a few members diverge on controversial proposals.

Joe Biden’s big agenda continues to fail. For six months, the Left tried to jam through the semi-socialist Build Back Better proposal. It died just before Christmas when Sen. Joe Manchin (D-WV) said he was a “no” vote on the partisan go-it-alone bill.

As the president’s motorcade was preparing to head to Capitol Hill to try to persuade Senate Democrats to carve out the filibuster that would enable them to pass a hostile federal takeover of elections, Sinema ended the controversy on the Senate floor. She declared that under no circumstance would she vote to erode the filibuster. The Arizona Senator argued it was a recipe for future failure, more hostility, and would lead to a further collapse of the public trust.

Many Democrats were furious at Sinema for the timing of her speech on the Senate floor. Moments later, Manchin issued a statement concurring with Sinema. Without their vote to erode the filibuster to bypass Senate Republicans, the Left incurred another crippling defeat.

Liberals Strike Out at Centrists

Across the media, the Left struck out against Sinema. They threatened her, called her a coward, and said she was a moral disgrace. Yet, Sinema is on the high moral ground. Democrats had one chance to fulfill former President Barack Obama’s goal of fundamentally transforming America, and all that stood in their way were two Democrats.

What little political capital Biden had is now gone. On Tuesday, the president even turned on centrist Democrats and gave them a moral choice to follow him or segregationists. The guy that was supposed to unite America, instead became the great divider. Voters are on to him, as shown by a new Quinnipiac poll, which is traditionally favorable to Democrats. It shows Biden’s voter approval rating is at an abysmal 35%. It’s possible that after his first year in office, Biden is already a lame duck.

Could something change their legislative fortunes moving forward? Sure, but it’s highly unlikely at this point. It’s possible some smaller provisions in the Build Back Better proposal get passed into law. Still, that was never supposed to happen.

With no options, the only place for Democrats to go is to voters as the 2022 midterm primary election season gets underway. If the Virginia and New Jersey 2021 elections mean much, Democrats are in big trouble come November.