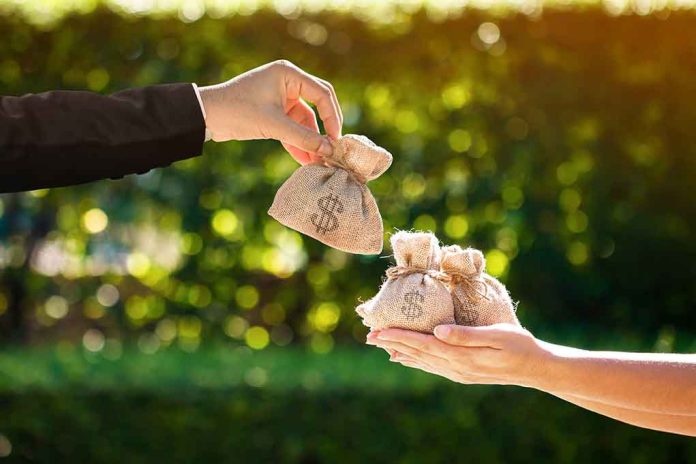 (RightWing.org) – There was a time in America when people paid for what they could afford, families took care of one another, and one got what they earned. It wasn’t always the best system, but it might have been better in many regards than today’s broken, corrupt political machine in Washington, DC.

Since the 1940s, Democrats have been building capital with voters. Initially, they did it through financial promises during the Great Depression. Once temporary, Social Security became permanent. Then Medicare and Medicaid followed. From the 1970s through today, the welfare state expanded dramatically. Try taking a government benefit from people, and watch what happens on the streets. Democrats know this, and they plan to cash in by wedging voters away from moderate Sen. Joe Manchin (D-WV).

At America’s founding, John Adams said that the Constitution was created “only for a moral and religious people.” James Madison wrote that good government depended on “sufficient virtue among men for self-government.” Today, we no longer value religion or morals, which could be perilous for our nation in the long-term.

On Sunday, December 19, moderate Democratic Sen. Joe Manchin (D-WV) revealed he would not vote for the Democrat’s radical Build Back Better semi-socialist climate change proposal. When he killed the bill, irate left-wing Democrats went off. They reminded Liberals who voted for the bipartisan infrastructure deal that they knew Moderates would do this to them. Decoupling the bipartisan infrastructure bill from the Build Back Better proposal stripped them of their leverage, but did it?

Some voters are about to become bigger pawns in a chess match that they don’t even know they’re playing in. On Monday, Senate Majority Leader Chuck Schumer (D-NY) announced the worst kind of politics possible. First, they are going to force Manchin to formally vote against the Build Back Better legislation.

Second, Democrats say the harsh treatment is just the icing on the cake. They plan to apply pressure on Manchin after taking a hands-off approach towards for six months.

How will Democrats apply extreme pressure?

This is their idea of negotiation… They plan to drive a wedge between West Virginia Democrats and their senator. In particular, activists at the direction of their Democratic handlers will go after Manchin’s lower-income constituents who would lose billions of dollars in federal benefits if Build Back Better in its current state fails.

They plan to tell low-income people that their senator stripped them of an enhanced child tax credit, lower Medicare-negotiated drug prices, and child care subsidies. It’s time to cash in on some capital that Democrats built up with voters over the last nearly 100 years. That’s how desperate the Left is to achieve their means.

It’s not often that national politics descend against one senator. That’s how vengeful and vindictive Democrats have become. From 2017 to 2020, this is how they attacked former President Donald Trump after he got in their way. Now, they’re doing it one of their own.

This is a shameful, divisive, and horrifying type of politics. If voters allow them to get away with it, meaning if Manchin caves, America is only on the verge of the worst kind of corruption that will decay and rot faster than anything we’ve seen over the last 80 years.

Let’s hope and pray that good people see the immoral and calculating behavior and put a stop to it.