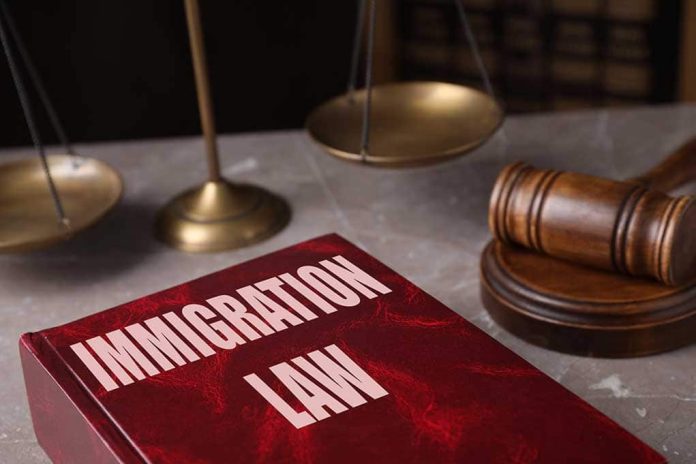 (RightWing.org) – Will someone please make it stop? How many more far-left proposals can continue to come at Americans? Apparently, that number is endless as Democrats talk about defunding the police, open borders, and passing an infrastructure deal that is more climate change and social engineering than rebuilding roads and bridges. Now they want to tack amnesty for 5.2 million illegal immigrants onto the bill.

That’s right, amnesty for illegal immigrants is another big push. However, the far-left is really stretching this one for all they can get. HR 1909 was passed in the House to give amnesty, citizenship, and voting rights to illegal immigrants, but it stalled in the Senate. The bill needs at least 10 Republicans to vote for it, and that isn’t happening. So, some Democrats are asking President Joe Biden to help them get around the GOP by making illegal immigrants (who they call “American Heroes”) new citizens through his infrastructure bill.

A small group of four Representatives and Senators, along with 18 co-signers, wrote a letter to President Biden pleading with him for help. However, their minds must be failing them. For one, the president doesn’t write legislation. Legislators do. Second, they don’t have the votes.

That’s not stopping the left-wing of the Democratic Party from trying to find a new source of voters to help them win elections years from now. Most people who follow politics know that’s the Democratic Party’s end-game when it comes to immigration. So, in the letter, the Democrats flatter illegals by labeling them “American heroes” for working during the pandemic.

Giving them amnesty, citizenship, and voting rights seems like an awful big reward, especially considering the millions of actual Americans who worked at grocery stores and other essential jobs during the pandemic barely got peanuts for their sacrifices.

Once again, Democrats are showing they favor illegal immigrants over working-class Americans. They want the legislation packaged into the infrastructure bill. However, there are two problems with their approach:

Republicans argue this proposal makes zero sense for America. Especially as the crisis on the southern border continues to grow out of control. Most say they won’t even discuss immigration until the border crisis is resolved and the border is secured. Otherwise, if the proposal introduced by Democrats is passed, it will serve to invite more illegal immigration.

When will this far-left insanity stop? It won’t until voters step in one way or another. Either Democrats will win a large enough majority in both chambers to push through their immigration agenda, or they are resoundingly defeated at the ballot box.

America may be too divided for either to happen unless enough people are fed up in 2022 and 2024 with the far-left’s hijacking of America.