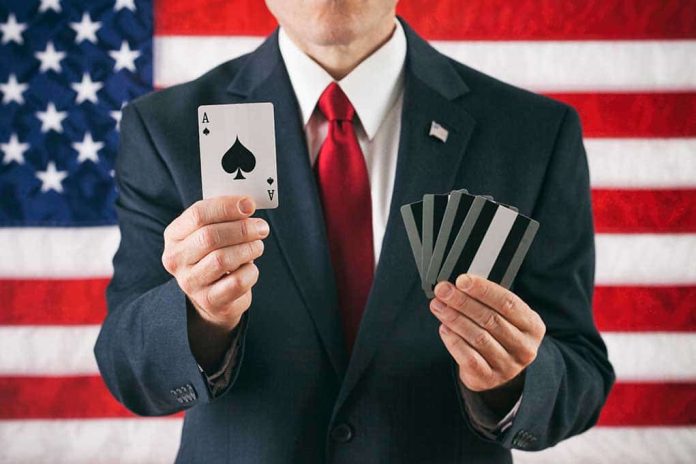 (RightWing.org) – When Democrats can’t win a good argument, it appears they are all too giddy to return to a trusted rhetorical device to diminish a solid position held by their opponents. When you can’t beat them, accuse them of being a racist, white person of privilege, or sexist. It’s the worst kind of politics imaginable, and Democrats perfected the craft going back as far as the 1990s. It’s called identity politics and they are now weaponizing it to shame Republicans — and even one Democrat — into accepting President Joe Biden’s nominees.

Senate confirmations are akin to a job interview. Over the course of this week, the Senate held three separate hearings to consider the controversial nominations for the Secretary of Health and Human Services (HHS), Secretary of the Interior Department, and Director of the Office of Management and Budget (OMB). At least one of them is likely to be pulled soon as a result of the hearings.

Biden nominated Becerra to serve as the Secretary of HHS. Beccera is not a doctor, nor did he ever work in the medical community. During a crippling pandemic, the GOP is looking for a qualified nominee to help lead America out of COVID-19’s grip. Republicans questioned how he could run a health agency at this time over his lack of experience. As an attorney general, Beccera was also highly partisan. His record on religious liberties and abortion were also points of contention.

Haaland was nominated to serve as Interior Secretary. A known climate control advocate, Republicans questioned her regarding her views on fracking and drilling on public lands. President Biden instituted a full-scale frontal attack on the energy industry by announcing his intention to ban the practices on public land. Additionally, he shut down the Keystone XL pipeline and is considering other measures to take America off of fossil fuel dependency.

Tanden was nominated to be the Director of OMB. The principal opposition to her nomination by both Republicans and Democrats is due to inflammatory partisan attacks against senators from both parties. Sen. Joe Manchin (D-WV) expressed concern that her previous statements were toxic and would harm the relationship between Congress and the OMB. Her confirmation is likely to fail in the coming days.

Numerous Democrats accuse Republicans and Democratic Sen. Joe Manchin (D-WV) of holding these nominees up to a different standard than Donald Trump’s nominees.

What exactly are those standards, and patterns Democrats claim exists?

All three individuals are people of color. Some Democrats are not shy of saying Republicans are racist. Of course, Rep. Alexandria Ocasio-Cortez (D-NY) stepped in it and all but accused Manchin of sexism. Rep. Hakeem Jefferies (D-NY) tweeted that Biden’s nominees were targeted over their color. Rep. Eric Swalwell (D-CA) tweeted that “little girls of South Asian descent” like Tanden don’t have the same opportunity as white men. Rep. Grace Meng (D-NY) tweeted that the “pattern” is questionable.

When Democrats can’t hold up to scrutiny over their policies, they attack ferociously. Republicans, unfortunately, have grown accustomed to it over the years. However, making accusations of racism and sexism for political gain is wrong when it doesn’t exist. If someone holds a policy view opposite a questioner, it doesn’t make a pattern. The only pattern is that President Biden made the appointments.

Fortunately, the shame game doesn’t enjoy the bite it once did, and it’s come to be expected.