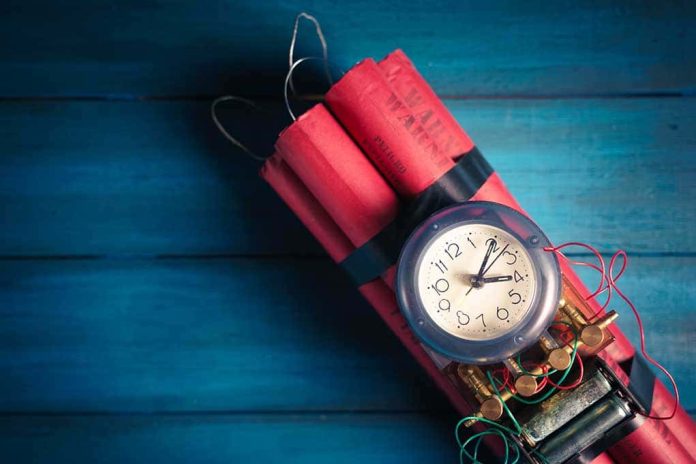 (RightWing.org) – Is there anything Democrats won’t do to seize full control and power over American’s in Washington, DC? Over the last two months, House Democrats passed numerous far-left legislation that the GOP is overwhelmingly against, including voting rights, DC statehood, and gun control. President Joe Biden’s infrastructure proposal is controversial, and Senate Republicans killed the Democrats’ dream of a January 6 commission using the filibuster rule on Friday, May 28.

As it stands, the Democrats’ agenda is only being held back by the Senate filibuster, with some exceptions where Democrats can use reconciliation. That’s forcing the far-left to threaten drastic measures, again. While calling to end the filibuster is a repeated refrain, Senate Majority Leader Chuck Schumer (D-NY) is setting the stage for a possible showdown. If he is successful, it could blow up the Senate as America knows it today.

Democrats Preparing to Kill the Filibuster, but Can They?

The majority of Democrats are growing impatient with the slowness of negotiations with the GOP over their agenda. Republicans aren’t in a hurry. Politically, slow is good for them right now. The longer they delay the Democrat agenda, the more voters will remember as the 2022 primary season heats up in six short months. Everything a political party does is driven by political calculus and strategy. Democrats know the game, and that’s why they are trying to rush through wide sweeping controversial legislation as quickly as possible.

While the GOP holds back the tide using the filibuster, Democrats allege that Republicans are nothing more than obstructionists. That’s 100% true. What else should conservatives and moderates do who disagree with the far-left agenda coming out of today’s Democratic party?

It wasn’t long ago that Democrats reveled in obstructing Donald Trump. They used baseless hearings to tie up the Senate and House, dragged us through two impeachments, and blocked Trump’s legislative agenda as well using the filibuster. It’s what the Senate does.

The filibuster requires that 60 Senators vote in agreement for legislation to pass. Over time, the Senate rule morphed into an important check and balance for both parties. It’s the only tool forcing Democrats to the table to negotiate. Otherwise, one party in a country nearly evenly split would dominate without any constraints.

The rule isn’t in the US Constitution, and it can be revoked at any time by a simple majority vote. Here’s the problem for Democrats: they don’t have the votes to get rid of the filibuster. It’s that simple. Plus, the majority of the public is against ending the filibuster.

So, tough days are ahead for the Left, who is in a deadlock.

As crazy as it sounds, the filibuster is keeping the country somewhat politically healthy right now. Blowing up the Senate isn’t the answer for impatient Democrats who can’t wait for their chance to fundamentally transform America. It’s time to end the talk about blowing up the Senate and get back to business.

Unfortunately, America may need to wait until 2022 to vote adults back into power.