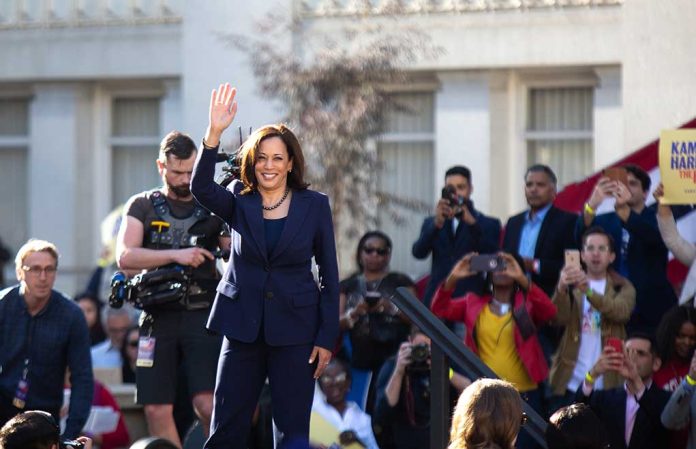 (RightWing.org) – Vice President Kamala Harris has had anything but a stellar first year in office. All the buzz and excitement of the first woman and person of color in the second-highest office in the land lasted all of about five minutes after President Joe Biden handed her his impossible agenda. Now, there’s a desperate effort from the Democrats to save her career.

Biden Set Harris Up to Fail

Harris wasn’t to be tasked with something of extreme importance that the whole country could get behind as Biden was during the Obama administration. Former President Obama handed him the job of creating an economic stimulus package that would hoist the nation out of the Great Recession. Instead, he handed Harris two projects he knew were doomed from the start: pushing a controversial “voting rights” package through an evenly-divided Senate, and finding the root cause of immigration from South America.

For the first issue, the voting rights bill Harris is pushing has exactly zero chance of going anywhere, as the filibuster requires no fewer than every Democrat and 10 sympathetic Republicans to pass. So far, they have none.

Additionally, the immigration nightmare Harris is dealing with is the worst it’s ever been. In 2021, more than 1.7 million immigrants were either apprehended or presented themselves at the border looking for asylum. That’s more than 3 times the number that crossed in 2020, and 700,000 more than the pre-pandemic numbers from 2019.

No Path to Redemption

At this point, nothing short of a political miracle will save Harris’ vice-presidency. Not only has she been handed the impossible tasks Biden doesn’t want to tackle himself, but she’s also expected to be the outspoken voice of the radical Left.

It’s an impossible position to be in, and it’s one Democrats will rue come midterms. Their star player has come up empty. Kamala Harris gets to go down in history as the first woman and person of color to stand off to the side with her hands folded as the man who has failed her fumbles his way through another speech, and little else.

Democrats are hopeful that Harris can re-establish her brand and be a major contributor for them during the primary season.