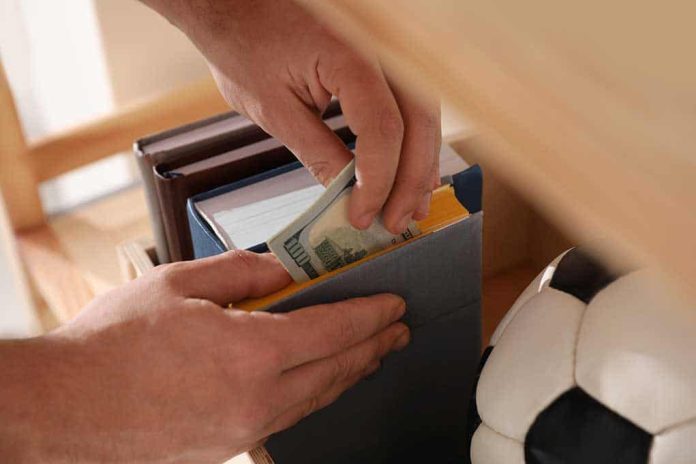 (RightWing.org) – At one time or another, parents remind their children it’s better to tell the truth than it is to lie. The consequences are usually much more painful when someone hides the truth and gets caught. Well, the Democrats don’t understand that simple concept — they lied again. Should we really be surprised? Their spending habits are not popular, but never mind that because they know better, or so they believe. A recent poll says most voters don’t like the go-it-alone approach by the Democrats and want bipartisan solutions instead.

According to new research conducted by the independent Committee for a Responsible Federal Budget, the Democrats are trying to pull the wool over America’s eyes. After weeks of negotiating with the White House and moderate Democrats, Senate Budget Committee Chairman Sen. Bernie Sanders (I-VT) joyfully declared a compromise. Initially, the Democratic Socialist wanted a $6 trillion go-it-alone partisan reconciliation bill. After moderates balked, the committee came down to $3.5 trillion. But, did it?

It appears the Democrats hid and buried some things, and the actual cost could be trillions more than they are telling us.

In early July, moderate Sens. Joe Machin (D-WV), Krysten Sinema (D-AZ), and Jon Tester (D-MT) expressed deep concerns about the cost of the emerging go-it-alone reconciliation proposal. So, the Left capitulated and offered a smaller package, but did it? It appears not.

According to a new report, the $3.5 trillion proposal is really $5 trillion or more. That’s much more in line with what the radicals wanted all along. So, how are they trying to trick America into getting what they want regardless of what the people want? They are using budget gimmicks and tricks. With some programs, they shorten how long it appears to be in place. In others, they don’t add a cost to it all. Minor tweaks in large bills can make a profound difference in a legislation’s potential price.

Are Dems in Serious Trouble With Voters?

It’s easy to confuse people when one isn’t honest about their intentions. Democrats knew for some time that the public wasn’t in favor of their partisan attempt to transform America. But, they don’t want you to know that their internal polls tell them everything. Reducing the apparent cost from $6 trillion to $3.5 trillion wasn’t an accident or the Left waking up. The accounting gimmicks and tricks were manipulative and intentional.

A brand new No Labels poll conducted by HarrisX found that 61% of voters said the Democrats shouldn’t go it alone and that a social spending bill should only be passed if both parties approve it. Additionally, 51% don’t support spending trillions on climate change or social welfare programs, and a whopping 78% fear the Democrats will increase their taxes down the road to pay for their spending.

Accounting gimmicks and tricks are nothing new for lawmakers. There was a time in the not-too-distant past when they could get away with it. People were tuned out as they went about their lives. The pandemic changed that as scores of people with nothing else to do tuned into the news, read, and began seeing for themselves.

It’s crazy we’re talking trillions of dollars. Who can count all those zeros? Democrats want us to thank our lucky stars they aren’t trying to pass their $90 trillion Green New Deal proposal. Well, let’s pray that moderates listen to the people in their districts and states, and stop this train before it jumps the tracks.