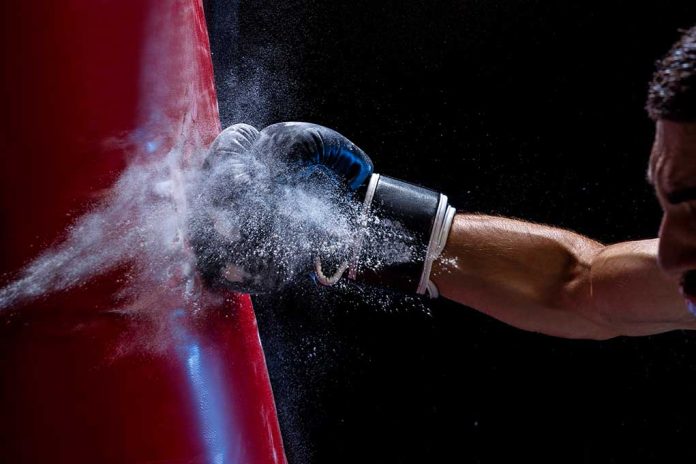 (RightWing.org) – The Democrats are struggling to put together a $3.5 trillion ‘human’ infrastructure package that’s heavy on socialist policies. The infighting is intense, and it’s becoming harder to see how the Left and Center of the party will bridge the widening gap. At this point, it could require heavenly intervention.

At stake is the Left’s dream to transform America and society by expanding the welfare state and social programs, providing free community college, transforming healthcare, and placing a down payment on the Green New Deal. On Sunday evening, September 19, the Senate Parliamentarian struck a major blow to another Democratic agenda.

Early last week, the Democrats tried to persuade Senate Parliamentarian Elizabeth MacDonough that illegal immigration was a budget issue and was allowed under the go-it-alone reconciliation process. The parliamentarian ruled against them. In the three-page decision published by Politico, MacDonough said that the federal budget was “merely incidental” to immigration, and the reconciliation proposal was a “tremendous and enduring policy change that dwarfs its budgetary impact.”

In the wake of the ruling, Senate Democrats declared their displeasure with MacDonough. Senate Majority Leader Chuck Schumer (D-NY) expressed disappointment. He said he plans to meet with the Senate parliamentarian in the coming days as Democrats try to find another way around her ruling. In addition, Senate Majority Whip Dick Durbin (D-IL) echoed Schumer’s disappointment. The White House chimed in and said, although the decision was disappointing, it expects Senate Democrats to come back with alternative proposals for the Senate parliamentarian.

While the Democrats try to plead their case, it could be difficult in light of MacDonough’s clear statement that the broader issue of immigration is not a budget matter — it’s a policy one. As a result, whatever the Democrats come up with could struggle to get around the parliamentarian’s logical ruling.

Democrats Could Override the Parliamentarian

Democrats could override MacDonough. First, there would need to be enough votes, and it’s clear that centrists and Senate traditionalists are unlikely to follow that route. There are other issues to consider, as well. Overriding the parliamentarian would effectively end the filibuster and destroy the working relationships within the Senate, ultimately turning the upper chamber into a rowdy group, not unlike the House.

Then, there is the prospect of what happens in the future. With the back and forths in Washington, DC, America could face continual changes as the party in charge overturns the previous party’s “mess” and introduces some go-it-alone legislation. That would create more distrust of government and instability in both society and the economy.

Despite the consequences, the growing frustration by the Left to get anything done could push them to more radical extremes. Would they have the votes to overturn MacDonough? It’s extremely unlikely. Would that stop them from trying? It depends on how desperate they get.

If the ruling stands as expected, Democrats would need 10 Republicans to overcome a filibuster on a stand-alone immigration proposal. It’s unclear if there is even one Republican vote for them.

In the coming days, expect some mental jujitsu from Democrats. If Democrats agree on a final bill in the coming weeks, and that’s a big “if,” it may not be the final say in the matter if they overreached on the reconciliation process.

Stay tuned. A lot is going on as the Democrats try to force change on America.