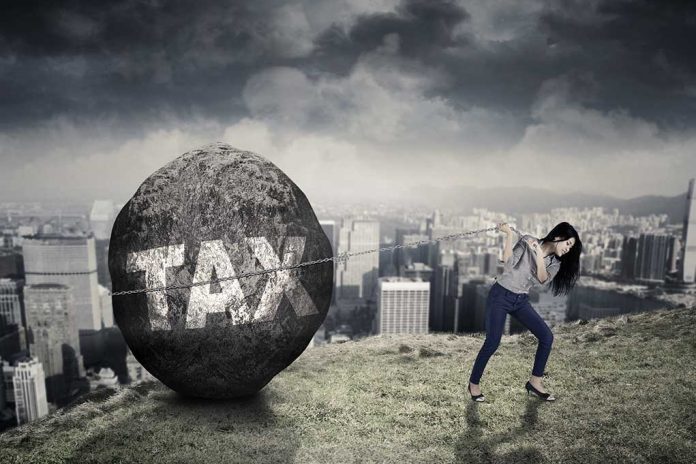 (RightWing.org) – As Democrats prepare to celebrate their partisan $1.9 trillion COVID-19 victory, warning signs are everywhere that it could pose a risk to America’s future. It’s not hard to see it either. We’ve been here before. Yet, instead of paying attention to the problems, Democrats ignored them to chase after their far-left ideology. They ran headfirst into potentially creating bigger problems than those they say they are trying to solve.

One of the greatest lines in recent history was spoken last year by former President Donald Trump. He warned public health officials, governors, and any who would listen that the cure couldn’t be worse than the disease. In his context, he was arguing that lockdowns threatened to harm America more than the disease itself. In recent weeks, Republicans again tried to warn Democrats that their partisan bill would create the same fate, but they refused to listen. The burden on America’s future could be severe.

What Is the Threat to America’s Future

Over the last year, some health experts warned that the lockdowns were dramatically impacting America’s youth. Separation from family and friends contributed to alcohol and drug abuse, anxiety, depression, and suicide attempts. Yet, Democrats claim the real problem was the pandemic, and they refused to accept that lockdowns could devastate an entire generation.

However, if that’s not enough, the COVID-19 relief bill could make today’s youth experience much of what the generation before it experienced. In the wake of the 2008 economic crisis, nearly an entire decade was lost as kids witnessed their parents struggle to keep their homes and jobs and pay the bills.

Today’s youth could be saddled with a crushing national debt that rivals the devastating economy of the 1970s. To be clear, the GOP shares in some of the problems during the Trump administration. They virtually ignored the national debt as well. However, two wrongs don’t make a right. The national debt surged in the last year of the pandemic as the government injected nearly $10 trillion between Congress and the federal reserve, and the total now stands above $30 trillion with the passage of the new relief bill.

The Consequences Could Be Crushing

The consequences could be long-lasting. To pay for the trillions of dollars in new debt, at some point, the government will either need to cut government spending or raise taxes. The likelihood of the former is virtually zero. It’s not often the government cuts programs. That leaves increasing taxes, and that burden likely won’t impact just the rich. It will hit everyone who works to provide for their families in some way.

Additionally, inflation is likely to rise as well. It’s typically tied to government spending. Since last year, many Americans saved money instead of spending it because they were stuck at home. With the trillions of dollars about to be unleashed into the economy as lockdowns end, the economy could overheat. In response, prices will go up as consumer demand soars, but supply takes time to catch up. In response, the Federal Reserve is likely to increase interest rates.

Homes, cars, school loans, and credit cards will get more expensive. Compounding it, the prices of goods and services could rise quicker than wages. The value of money will go down, and purchasing power with it will decrease.

The political fallout is difficult to project. Right now, the public loves the COVID relief package. However, if the past is an indicator of the future, that could change rapidly as America faces new burdens inconceivable today but possible tomorrow. In 2010, Democrats celebrated Obamacare after its passage much like they are the stimulus bill today. They predicted that Republicans would pay the price for not getting on board with the sweeping changes to healthcare.

Just the opposite happened. The GOP won a record 63 seats in 2012 due to the Democrats’ overreach. They created the Tea Party and a new movement of conservatives. That’s the risk they face today if tomorrow goes south.

One should never count their chickens before the eggs hatch.

It appears that Democrats who are more concerned with their agenda than America’s future once again fail to grasp that simple concept.