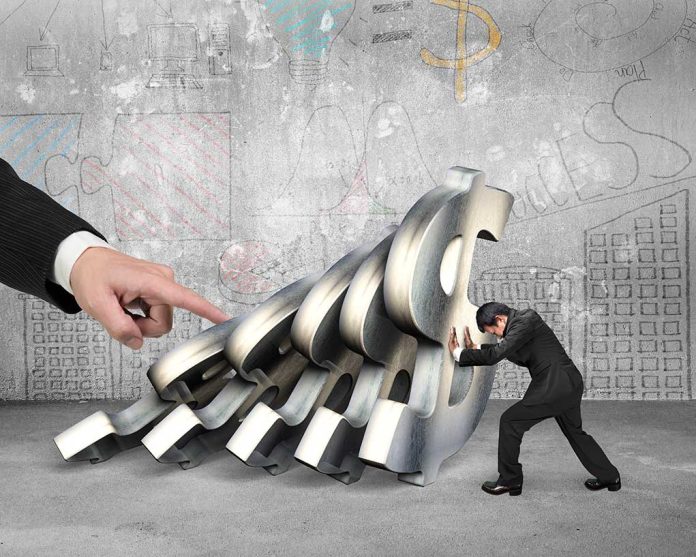 (RightWing.org) – The fall season is among us. That means it’s time for politics to kick into high gear. The Democrats’ overstuffed agenda might be impossible to fulfill. The fiscal year 2022 budget is due by September 30. House Democratic leaders promised a controversial vote on the Left’s bipartisan infrastructure deal by September 27. The go-it-alone Democratic plan to transform America’s social programs, education, healthcare, immigration, and climate change is in peril.

To round out the slate of nearly impossible rushed measures, Congress must decide what to do about the debt ceiling. Of course, that issue could be off the table if Democrats simply added it to the reconciliation legislation. There’s even a radical workaround involving President Joe Biden. Regardless, Democrats refused to do that in the face of a near Republican revolt over increasing the debt due to massive Democratic spending. So, instead of dealing with it themselves, Democrats want to play games and push a fake narrative blaming Republicans. The GOP seems to be daring them to do just that.

In 2021, the Democrats intend to spend over $6 trillion on COVID relief, infrastructure, “human” infrastructure, social programs, and a deposit on the Green New Deal. They avoided negotiations with the GOP and didn’t care to earn bipartisan support. If Democrats get their way, deficit spending will provide the lion’s share of their funding for reckless spending plans.

Republicans argue that the Democrats stole the credit card to pay for the entertainment of shame they couldn’t afford. Then, they demanded that Conservatives pay the bill. The process isn’t just a sham; it’s an insult. Who ignores someone and then comes begging for a favor?

Well, that isn’t going to work, and the GOP is adamant there aren’t 10 Senate Republicans who will break a filibuster vote to raise the debt limit. So, what are the Democrats to do? Instead of solving the problem they created on their own, they will try to blame Republicans if there’s a default or government shutdown.

The White House said it expects a bipartisan push to raise the debt ceiling — of course it does. So, Democrats pushed a far-left agenda, advocated for driving an already overheated economy over the ledge, ignored Republicans because they believed they could, and then, at the last minute, demanded the GOP indirectly support and reward bad behavior.

The GOP’s refusal to get on board isn’t so much about the debt as it is the Democratic policy proposals designed to transform America into the Left’s image. If the GOP caves on this, they essentially endorse the transition from a capitalist, free-market society to a socialist hybrid model. It would be an abandonment of leaner, more accountable government as the founders envisioned through checks and balances to ensure personal liberties. Under the Democrat’s utopia, the government will be more extensive, more intrusive, and more dictatorial in American lives. It would be an abandonment of liberty and what made America great.

The debt ceiling is the one tool the Republican minority party can leverage to try and control the reckless Democratic agenda. If that means defaulting to preserve America’s future, then the GOP seems intent on potentially going down that road.

The danger for them is the narrative. Republicans must make the case, starting now, that they are fighting for the nation’s future. The Democrats and media will be brutal. However, if they keep pointing out the failures of Biden and Congressional Democrats in 2021, they will have a great case to make.