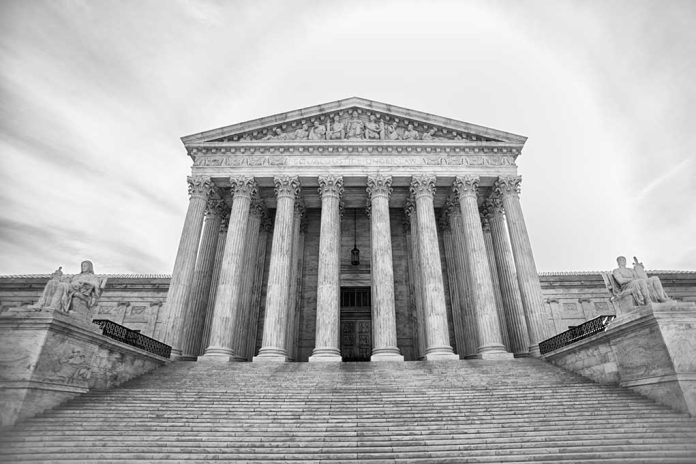 (RightWing.org) – In 1978, Congress created the Foreign Intelligence Surveillance Court (FISA). Its purpose was simple. The secret court’s job was to review applications by government agencies requesting communications between individuals and foreign contacts in limited and specific cases. What it’s become since 9/11 is entirely different.

Today, the court issues broad approvals that allow government agencies to collect data, impacting millions of Americans. On October 8, the US Supreme Court will decide if it will hear a case brought by the American Civil Liberties Union (ACLU) regarding the FISA court and secret rulings. At stake is a legal determination if the court is actually operating as a court, or is an arm of the intelligence community that’s allowed to withhold information from Americans in violation of the Fourth Amendment, which protects citizens against warrantless searches and seizures.

The dilemma for the government and society is complicated. On one hand, how far can the government go in collecting data to protect the nation’s security and ensure public safety? On the other hand, when does it go too far and violate a person’s Constitutionally guaranteed liberties? And just as importantly, who answers those questions?

The FISA court works in secret and only hears from one side: the federal government. Over the last decade, the public learned the court rarely rebuffs the government’s request. While some work may need to be secret, no one knows the basis for the private court’s decisions, which could be highly consequential for Americans with Constitutional rights and guarantees. Among them are free speech, freedom of expression, and privacy rights.

Routinely, courts decide if they can unseal their records and rulings. However, in 2020, a specialized court ruled that the FISA court lacked the power to determine if it could release its records and judgments according to the First Amendment. The appeals court said Congress didn’t grant it that power. Therefore, the FISA court wasn’t obligated to release its records.

Is the Government at Odds With the Constitution?

As a judge on the District of Columbia Circuit Court of Appeals, Merrick Garland wrote a firm declaration saying the justice system was responsible for being open and transparent. He said whatever the government creates is a public document and is subject to public inspection.

In a shocking twist, Garland’s Department of Justice contradicted the former judge’s and now attorney general’s previous ruling. Federal prosecutors under now Attorney General Garland said the public has no right to know the secret FISA court orders under the First Amendment.

The ACLU disagrees. In a brief supporting the ACLU to the Supreme Court, The Brennan Center for Justice and Americans for Prosperity Foundation said secret laws created and enforced by the FISA court don’t support democratic norms. The two entities added that law prevents the public from learning how the secret court shapes laws, skirts accountability, and ultimately weakens the laws of the land.

The question is, will the Supreme Court take the case and finally decide the constitutionality of the FISA court? To this point, it’s been difficult to expose the court’s violation of the Constitution because what it does is secret. It’s hard to prove injury or wrongdoing when no one can prove it’s happening.

ACLU attorney Patrick Toomey says the case is not about the secret court, but whether the Supreme Court has a role to play in exercising its power of review over the FISA court’s decision-making as an internal check and balance.

Perhaps this time, someone found a way to hold the FISA court accountable? We’ll see if the ACLU is persuasive before the nine Supreme Court justices.