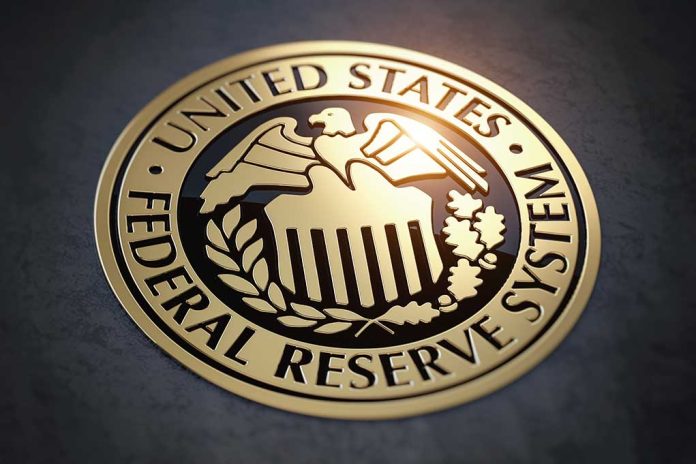 (RightWing.org) – In 1913, President Woodrow Wilson signed the Federal Reserve Act. It created the nation’s first central bank with the authority to ensure a safer, more flexible, and stable monetary and financial system. The Federal Reserve primarily works outside the purview of Congress. It has wide-ranging powers to regulate banks and the flow of money in the economy to control inflation and other monetary issues.

One can imagine why the Fed is so concerning among conservative lawmakers, Constitutional scholars, activists, and the public. Through its powers, it could potentially initiate all kinds of policies related to causes that ought to be under the domain of Congress instead of unelected bureaucrats. That’s why a controversial Biden nominee is causing headaches for Republicans. Once again, it could come down to one or two Democratic Senators to decide the fate of the US economic system.

On January 14, President Joe Biden nominated Lisa Cook to sit on the Board of the Federal Reserve. She is a professor of economics at Michigan State University. Once again, Biden nominated a black woman to the board. In and of itself, that is not an issue. What is an issue is that this person has a strong history of racial activism and may not be the best-suited person for the position on the nation’s central bank. Yet, if senators don’t vote to confirm Cook, they risk obtaining the racism label – making it difficult for them to vote against her nomination.

So, what is the core issue with Cook?

Liberals love that Cook’s experience with race and economics could force the Federal Reserve to initiate diversity regulations on banks and other financial institutions apart from Congressional authorization. In early 2020, Cook tweeted that she endorsed race-specific reparations for years of slavery and economic discrimination.

Ron Daniels and @SandyDarity bring clarity to the reparations debate. Read @TracyJan’s entire thread, which is also clear and timely, and the comments. 👇🏽 https://t.co/qAbX9VzFwB

Additionally, she also advocated for legislation that would institute a commission to study the far-left wing issue. Is it possible the Fed could create economic policies that hurt one segment of society to benefit another? If so, would that be a gross violation of its Congressional charter and mandate?

Unfortunately, that’s not all. Cook also served on the Opportunity & Inclusive Growth Institute at the Minneapolis Fed. Under her tenure, the Minneapolis Fed focused on politically charged causes, including racial justice activism that was not part of its legal mandate. Sen. Pat Toomey (R-PA) accused Cook of improper political advocacy while sitting on the board.

Did Biden nominate another candidate for the purpose of identity politics and to use an independent regulatory agency to do what Congress won’t or can’t? During the 2020 presidential campaign, Biden stated that he supported a study of economic impact on generations of former slaves and their dependents, reparations, and legislation authorizing the government to conduct it.

Critics argue there isn’t a method to duly compensate people today for actions taken hundreds of years ago. They also say America is in a different place after decades of reforms in racial equality. The biggest concern among Conservatives is the potential misuse of an independent federal agency to initiate far-left policies outside of Congress’ Constitutional mandate. If the Federal Reserve can initiate regulations with the force of law outside of Congress, what are its limitations?

Regardless of the debate about reparations, the question is simple: should an activist disguised as an economist be sitting on the board of the nation’s central bank?

Stay tuned. The hearings and the vote to confirm or deny Cook to the Federal Reserve could be very interesting.