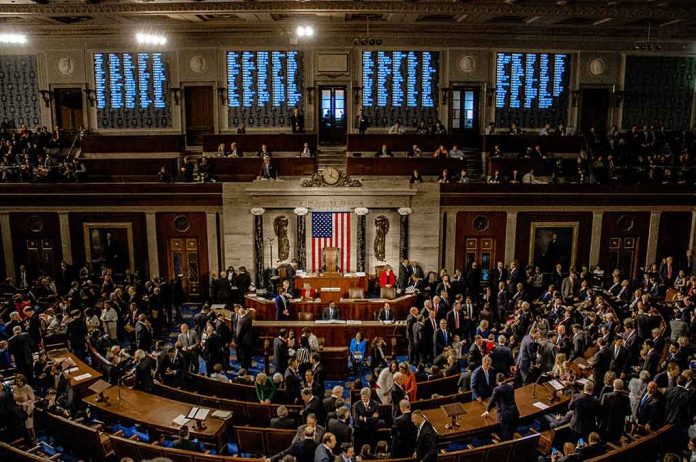 Congress Is Using This “Trick” To Mislead Americans

(RightWing.org) – In 2021, America got a crash course in far-left democratic socialist spending policies. President Joe Biden’s Build Back Better failed to pass in the Senate over Sen. Joe Manchin’s (D-WV) concerns about the national debt and a fast-paced rise in inflation. Still, Democrats successfully passed the American Rescue Act in March 2021 on a party-line vote. Two former high-ranking Democratic treasury officials warned them it would spark an uncontrollable inflation spike.

In 2021 alone, the US government spent over $300 billion in interest payments alone. As the national debt rises, so do the interest payments; it’s no different than your personal credit card. When politicians attempt to pass multi-billion or trillions in news spending programs, they make outrageous claims about how they’ll pay for it. The one thing lawmakers don’t talk about is how they mislead Americans about the actual cost of legislation because they leave out the interest payments on the new debt they create.

Normally, Congress will ask the Congressional Budget Office (CBO) to provide an estimated cost of a piece of legislation. Here’s the tricky part — the CBO can only use the data Congress gives them to create the cost of a bill. What the politicians leave out is a request to include the interest on any debt created by a proposed bill.

On July 1, 2021, the CBO released its budget and economic projections for the next 10 years. Over the next decade, it said annual interest costs on the national debt would be almost $1 trillion per year. That was before the massive inflation spike and interest rate hikes imposed by the Federal Reserve, so it’s bound to be much higher.

On Wednesday, April 27, the Washington Free Beacon said over 40 GOP lawmakers demanded the CBO begin including the cost of interest in all upcoming legislative budget estimates it provides to Congress.

So, when lawmakers make claims like President Biden did last year that his proposals wouldn’t add to the national debt, that was proven by economists to be untrue. But, because they withhold the interest payments from the public when they ask the CBO to provide a score, it makes it hard to know the actual cost of the legislation.

Rep. Michael Cloud (R-TX) told the Washington Free Beacon that nations could rise and fall on fiscal responsibility. That’s why he and 40 other GOP Representatives are demanding the CBO include interest payments in future legislative cost estimates.