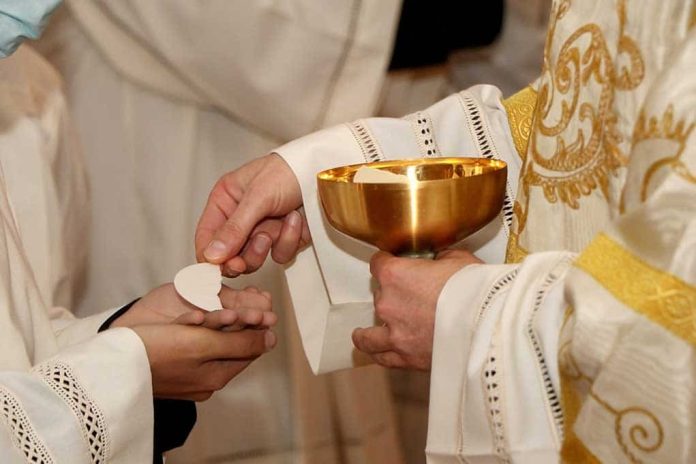 (RightWing.org) – President Joe Biden likes to invoke his faith as a member of the Catholic Church. However, some questions recently arose regarding his ongoing ability to partake of church sacraments given his views on subjects like abortion.

On Wednesday, November 17, the US Conference of Catholic Bishops voted by secret electronic ballot to accept a vital church document titled “The Mystery of the Eucharist in the Life of the Church.” The measure passed by an overwhelming vote of 222 to 8, with 3 bishops abstaining. Protocol required a two-thirds majority of the vote for acceptance of the critical document.

The United States Conference of Catholic Bishops voted overwhelmingly to accept the document “The Mystery of the Eucharist in the Life of the Church” during the afternoon session of the fall USCCB meeting on Nov. 17, 2021.https://t.co/LRlKZoAmQT

The vote reaffirmed the long-standing position of the US Bishops Conference that Catholics who reject the Church’s moral teaching on issues like abortion should refrain from taking communion. However, some Conservatives had hoped the bishops would take a stronger position on members like President Biden, who support abortion and don’t indicate repentance for that position.

The communion document accepted by the bishops emphatically stated that Catholics in a position of public authority do “have a special responsibility” to abide by the Catholic Church’s moral code.

As President of the United States, Biden certainly falls into that category and should serve as an example for the people he hopes to lead. He can’t have it both ways.