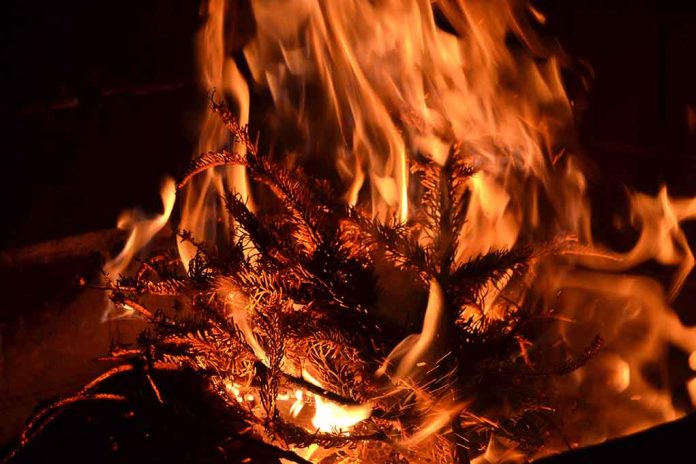 (RightWing.org) – New York’s ultra-liberal criminal justice laws have attracted a lot of controversy, and it looks like more outrage is on the way. A high-profile suspected arsonist was recently released without bail – and, of course, he’s run away.

Alleged Fox Christmas tree arsonist on the lam after he was freed without bail https://t.co/OQ2RqtMpSn via @foxnews

On December 8, 49-year-old homeless man Craig Tamanaha allegedly set fire to the Christmas tree outside Fox News’ New York HQ. Tamanaha said he’d been thinking about burning the 50-foot artificial tree all day, until just after midnight he snuck into its enclosure and set it on fire. The blaze caused around half a million dollars worth of damage.

Tamanaha was quickly arrested and arraigned on two felony charges and misdemeanor arson. The judge freed him to await trial, and ordered him to check in with a supervision program – but he didn’t set any bail, because a 2020 New York criminal justice reform outlawed bail for a wide category of crimes.

Predictably, Tamanaha didn’t show up for his check-ins, and on December 29 a fugitive warrant was issued. He’s still on the run.

It didn’t take much imagination to work out that Tamanaha wasn’t the type to stick to a behavior order. He set fire to the tree just nine days after being arrested for exposing himself outside Ghislaine Maxwell’s courtroom. The whole reason bail was invented was to give criminals a reason to obey the terms of their release – if they didn’t, it would cost them money. Without bail, they have no reason to comply. That should have been obvious, so why was the system changed?