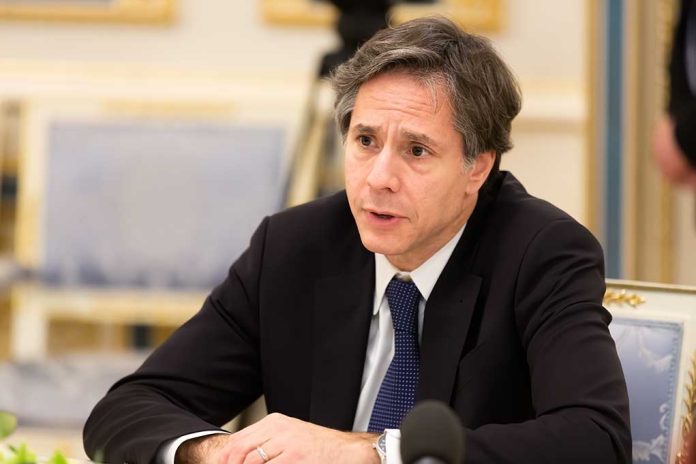 (RightWing.org) – Tensions continue mounting between the United States and its allies over a possible Russian invasion of Ukraine. News outlets recently reported that Communist China is pressuring Washington to cave to Moscow’s demands to back down.

On Thursday, January 27, the Washington Examiner and The Telegraph reported Chinese Foreign Minister Wang Yi told Secretary of State Anthony Blinken to back down on America’s hardline position on Ukraine during a Wednesday phone call. “The security of one country can’t be at the expense… of other countries,” he reportedly said during the call, adding that Moscow’s security interests “should be taken seriously, and [heeded].”

Chinese Foreign Ministry Spokesperson Zhao Lijian followed up later that day at his daily press conference. He accused Western countries like the United States and its European allies of using “various despicable means” to punish Russia and other nations for maintaining independent policy positions.

Lijian took direct aim at the Ukrainian standoff on Thursday. He told reporters US-led efforts to create tensions don’t ease the pending crisis “but only adds to uncertainties [in] the region.” He added that China stands “firmly opposed” to US actions regarding Ukraine.

Creating tensions does no good to easing the #Ukrainian crisis, but only adds more uncertainties to the region and the whole world. #China is firmly opposed to this.https://t.co/yA1rv8hfxk pic.twitter.com/lzTeQaXs89

With rumors of war between China and Taiwan, the Biden administration should consider treading lightly with Chinese officials unless it wants to create an additional foreign policy crisis.