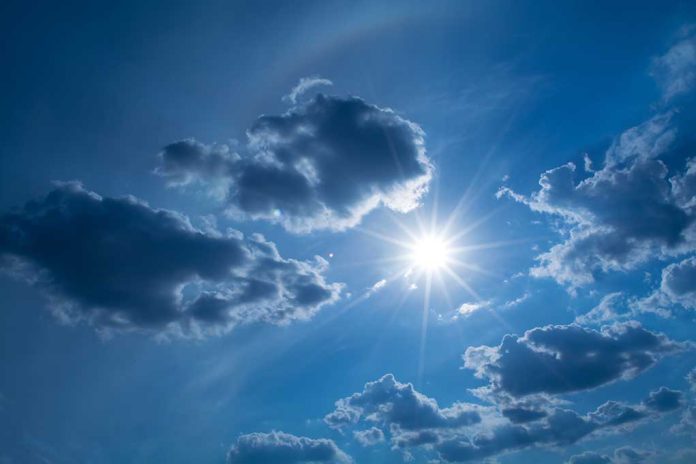 (RightWing.org) – China is facing its worst heatwave since it started maintaining records in 1961. On August 12, the National Meteorological Center issued a high-temperature alert, followed by its first nationwide drought warning a week later. Concerned the resulting lack of adequate water supplies could impact crops, officials are reportedly attempting to control the weather using a technique called cloud seeding.

On August 17, BBC News broke the story that Chinese officials were attempting to induce rainfall in portions of the country bordering the Yangtze River. Local media outlets reported that provincial officials were launching rockets laden with chemicals.

Chinese authorities are attempting to induce rainfall in parts of central and southwest China amid a severe drought and record-breaking heatwave https://t.co/qDuXmxcAb7

Cloud seeding involves introducing tiny ice nuclei using a catalyst like silver iodide at sub-zero temperatures into subfreezing clouds, according to the National Oceanic and Atmospheric Administration. The introduction of those chemicals enhances the clouds’ ability to produce rain. Snowflakes quickly form, fall from the clouds, and turn to rain as they approach the earth’s surface.

Video shows a tributary of China’s most important river, the Yangtze, almost completely dried up amid an unprecedented drought across southwestern China.

Weather modification programmes are being launched to try to replenish the basin ⤵️ pic.twitter.com/IxppBLDFQK

Inducing rain to fall on parched land sounds like it could be a good idea, but at what price? There are still unresolved questions surrounding the process. The most pressing question is “What will the seeding chemicals do to lakes and streams and any other water source?”

In spite of that and many other questions still unanswered, on August 23, the Chinese Ministry of Agriculture and Rural Affairs issued a press release detailing the nationwide effort to “secure” the nation’s autumn harvest amid the unprecedented heatwave. The statement urged “relevant authorities” to issue appropriate alerts and boost efforts to increase irrigation efficiency and “produce artificial rainfall when necessary.” The ministry also plans to spray crops with an agent to help them retain water to limit evaporation.