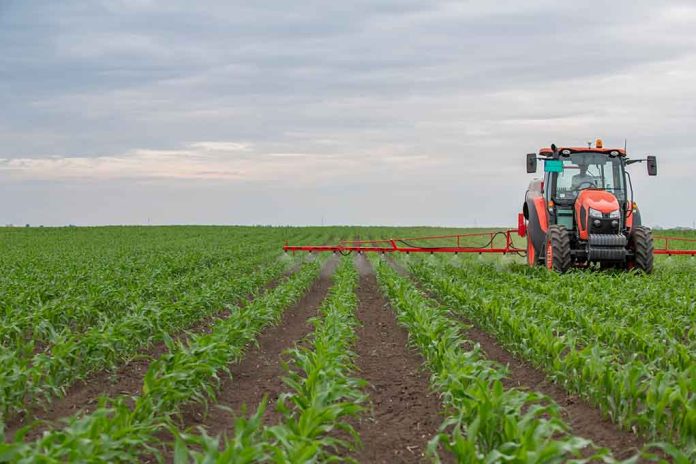 (RightWing.org) – Over the last several decades, tensions between China and the United States have escalated. In recent years, it advanced quickly as the communist government aggressively pushed to build its military and spread its tentacles across the globe. Many policy experts say the Chinese have stolen business, government, and military secrets, and trust between the two economic powerhouse nations is at an all-time low.

Over the last several months, reports popped up the Chinese were purchasing vast amounts of US farmland, some of which are close to sensitive US military bases. As the world’s largest populated country struggles to meet its needs, it’s looking to the US for help. On Wednesday, August 24, The National Pulse reported the US Ambassador to China headlined an event sponsored by a communist-linked influence group. Some say the US is trying to build trust; others suggest it can’t be earned.

Ambassador Headlines Event on US Farmland

US Ambassador to China Nick Burns recently addressed dialogue between the two countries at an affair hosted by the US-China Heartland Association (USCHA). Nearly 200 people from the government, academia, and agriculture-based businesses attended the event that targeted farmers and US farmlands. Burns told the audience the two countries needed to communicate more as the relationship between them regarding agriculture was essential.

The USHCA says it focuses on building trust and connections with the above officials and local communities in the heartland with Beijing. Yet, it appears numerous communist-controlled entities are working to gain access to American agriculture much the same way they built a presence in research Universities.

How Can There Be Trust?

All relationships are a two-way street. What exactly is the Chinese Communist Party (CCP) compromising? They steal from America and threaten our partners and businesses. On May 26, the US-China Economic and Security Review Commission warned that Beijing’s goal of self-sufficiency and strategy to gobble vast US farmlands was a national security risk.

Researchers suggested the Chinese were attempting to purchase agribusinesses and farmland to gain even more leverage over US supply chains. It also stated the CCP sought to steal intellectual property and manufacture bioweapons using American-grown genetically modified crops.

As trust is in short supply, is it wise to collaborate with the Communists regarding US food production and supply chains knowing Beijing has a self-serving motive?