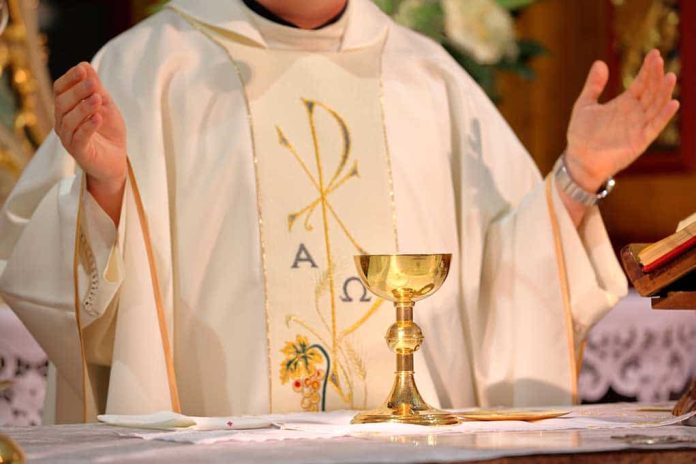 (RightWing.org) – As the nation’s second Catholic president, Joe Biden’s faith has drawn its share of scrutiny in the media and elsewhere. The White House press secretary described him as a “devout Catholic” when asked about his position on using taxpayer funds for abortion.

However, not everyone agrees. The US Conference of Catholic Bishops condemned his position on abortion and other moral issues the day of his inauguration. Fr. Jerry Pokorsky echoed that sentiment, expanding upon it in a letter posted on Catholic Culture on February 26.

Fr. Pokorsky explained that Biden’s “habitual and unapologetic” sins are on “full display” for the world to see. He listed several of his issues with Biden, like a recent statement “celebrating” the anniversary of Roe v. Wade. He also cited Biden’s revocation of the Mexico City Policy, which ensures that organizations performing abortions don’t receive any foreign aid money.

He concluded his remarks saying that Biden’s view of his Catholicism and his rise to the presidency has brought to light the turmoil in the Church.

It has revealed the diversity of positions as some priests and bishops blindly accept Joe Biden as a “Catholic-in-good-standing” just because he attends mass. Others say nothing, perhaps out of fear of retribution or lawsuits, and still others reject his claim of devotion based on his actions. You see, Biden’s election has illuminated a crisis within the church leadership, but Fr. Pokorsky expects God to resolve it, using the Holy Spirit “to raise up successors” to the priests and saints of the past who boldly stood up for their faith, against all odds.

According to Fr. Pokorsk, Biden’s claim of his devotion to his faith “forces an unavoidable choice.” He went on to say that Catholics must now decide to “stand with the Church and her sacraments and reject Biden’s iconic culture-of-death policies, or… celebrate Biden’s flouting of Church teaching. In so doing, we will reveal whether we intend to magnify the Lord or magnify Biden’s immorality.”

This is indeed a pivotal time for the Church as it is for all people of faith. Fr. Pokorsky believes that the resolution is up to God.