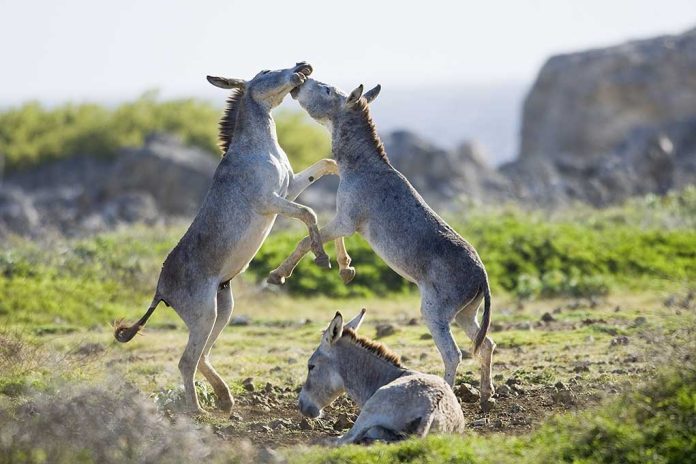 (RightWing.org) – As far-left Democrats seek to make good on their promises to transform America’s capitalist system into a hybrid socialist one, it appears that infighting is causing severe headaches. The Left and Moderates are so far apart that a Democrat stalwart is sending out a warning to the party. So, on Wednesday, September 22, President Joe Biden stepped in to try and stop the hemorrhaging.

The question is, is Biden’s interjection enough to prevent his key domestic agenda from going down in flames? There are fundamental philosophical differences between moderate and progressive Democrats. The Left feels this is their chance, and the Moderates feel Progressives are moving too fast and too far away from their voters and comfort zones. Something has to give. Mixed in the middle of the mess are Republicans who cleverly keep the Democrats off track.

Can Biden Stop the Train Wreck

Over the last few weeks, Moderates and Progressives have been threatening each other in a game of chicken. The Left wants to transform America by creating a more dependent social welfare system that includes child care issues, education, healthcare, immigration, and climate change. It’s not just the agenda that’s the challenge. The cost of the $3.5 trillion plan worries Moderates who don’t believe in trillions of government spending. The amount we’ve spent throughout the pandemic has overheated the economy and hurt the livelihoods of their constituents.

Compounding the problem for Democrats are Republicans doing what they can to sabotage the two bills, and for good reason. It’s not a good policy for the government to trap millions of Americans in more government dependency instead of ensuring they have the tools to make a better life for themselves through the free market system. A recent study demonstrated that social issues don’t drive the income equality gap as Democrats claim, who are willing to spend trillions of dollars to eliminate it. Instead, personal choices appear to be the primary driver of income inequality.

So, what’s Biden to do as the trains start running off the track? The squeeze is on. Biden held three separate meetings on Wednesday; one with Speaker Nancy Pelosi (D-CA) and Senator Chuck Schumer (D-NY), a second with a group of Moderates and a third with Progressives. However, it appears nothing new came out of these meetings. Democrats are trying to put on a good face and make it seem like the president is uniting him. However, a closer look at reality suggests appearances are deceiving.

The things driving wedges are still wedges. House progressives didn’t agree to give up on holding the bipartisan infrastructure deal hostage unless the Senate approved their $3.5-trillion spending package. Moderate Sens. Kyrsten Sinema (D-AZ) and Joe Manchin (D-WV) didn’t change their positions on the out-of-control spending.

So, what did Biden accomplish? It’s not clear. Manchin and Sinema will gladly make a deal. However, that deal will not satisfy the Left, who regularly attack the two Moderates as sellouts to corporations and big oil. Over the weekend, Sinema told Joe Biden she wouldn’t support the prescription drug proposals coming from House Democrats, and is still not voting for the massive bill. Manchin questioned why the Democrats would hold up the bipartisan infrastructure deal. He didn’t waver from his position that the Democrat’s reconciliation proposal should be delayed. On that issue, he was silent after the meeting. So, neither of the two publicly changed their position after meeting with Biden a second time in less than a week.

In an evenly divided Senate and a three-vote majority in the House, it’s not going to be possible for Democrats to get what they want. As reported in the New York Times, Democratic stalwart John Podesta, a former senior official in both Clinton and Obama administrations and Hillary Clinton’s top campaigner, wrote Democrats a seething letter on Wednesday. He told them to start compromising and said Democrats will either get “both bills or neither.”

Podesta is right. Despite Biden’s intervention, he can’t change the dynamics of an evenly divided Congress and a fractured Democratic Party. The Left believes it already compromised by coming down from $6 trillion to $3.5. At this point, the far-Left may hope the bills fail. They believe it would mobilize the Left in the upcoming campaigns.

You won’t hear this publicly, but it’s true. If they cave and go less, it could turn off progressive voters who feel that the people they send to Washington aren’t listening to them. So, why bother voting? Democrats would much prefer to keep the pot stirred and hope they win elections with an energized base than gain something in the bills over nothing and dishearten their supporters.

In the end, Biden is helpless to do anything about the politics. He doesn’t have any political capital with progressive voters. Trump is gone. Democrats accomplished that mission, for now. At this point, Biden is a secondary actor in a B movie that no one is paying any attention to. He’s just a filler.

So, until something changes, all the messaging of hope is smoke and mirrors for a party that’s too unstable to accomplish big goals. Is it possible Democrats pull it together in the end and one side capitulates? Sure, it’s possible, but is it good politics?