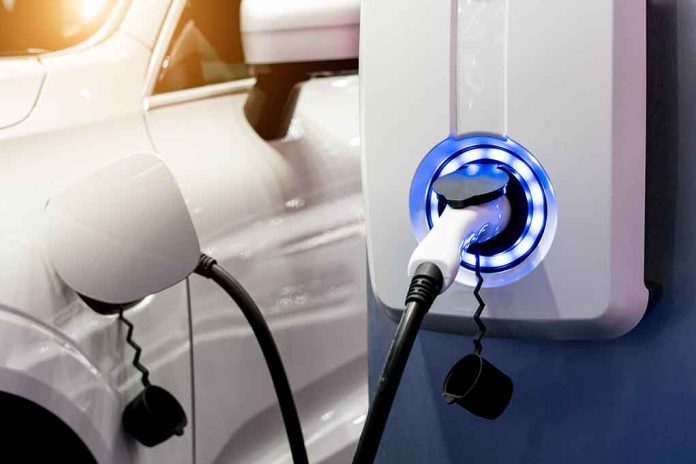 (RightWing.org) – In 2021 and 2022, Democrats made a concerted effort to pass legislation forcing American drivers to transition from gas-powered vehicles to electric-powered ones. Last year, the bipartisan infrastructure law set aside significant funds to improve the availability of charging stations across the country. On Tuesday, August 16, President Joe Biden signed the Inflation Reduction Act, which immediately became the most significant climate legislation ever signed into law. It sought to increase the sales of electric vehicles (EV) and phase out gas ones.

Still, there are numerous hurdles. Despite tax credits, battery-powered cars and trucks are much more expensive than their gasoline counterparts. Then, there’s the question of electricity. Experts say extreme weather, cyberattacks, and unpredictable fossil fuel for electric generation is taxing the grid. In California, the state is banning new gas car production by 2035, and numerous states are following its lead. Yet ironically, power operators are telling residents not to charge vehicles due to a lack of grid capacity.

While politicians and bureaucrats in the country’s most populated and liberal state push citizens out of their gas automobiles, many may struggle to drive electric cars and trucks. To prevent the grid from becoming overwhelmed, officials asked EV owners not to charge them between 4pm and 9pm over the holiday weekend and for as long as the massive heat wave lasts. The Golden State’s heatwave has temperatures soaring upwards of 115 degrees. The California Independent System Operator is working to increase the power supply ahead of the Labor Day weekend when officials expect demand to surge.

The state enacted a “Flex Alert.” Officials are asking people to reduce their energy usage from 4 p.m. to 9 p.m.; those are peak hours for electricity demand when solar starts to become less effective.

During Labor Day 2021, California experienced rolling blackouts. It’s not a unique problem, nor is it specific to one state. Texas, New York, and Louisiana have also struggled to keep grids operating during extreme weather conditions.

Can the Grid Handle the Crisis the Biden Administration Is Creating?

In 2021, President Biden began to cut America’s oil supply by eliminating drilling on federal lands and waterways. He revoked a permit for the Keystone XL Pipeline. Now, he’s working aggressively to eradicate fossil fuels, as promised during his presidential campaign. By the summer of that year, consumers began feeling the impact as gas supplies began to drop and prices rose. The president urged Saudi Arabia to increase oil production numerous times, but the mid-east nation rebuffed him. At the same time, he prohibited US energy companies from increasing production and providing relief.

In the late spring, gas prices hit an all-time high: over $5 per gallon. On Thursday, September 1, AAA said the average national gas price was $3.829 per gallon. In some parts of the country, it’s still over $5.

On August 2, the Department of Transportation announced it’s moving to add 500,000 EV charging stations by 2030. Congress funded it through the bipartisan infrastructure package. Still, what good will it be if the local and national grid system can’t handle the load? Some estimates suggest EVs could increase electric demand by 50%. That means the country would need to build more power plants, which takes time, money, and overcoming burdensome federal regulations.

So, will California be the norm across the USA?

Will there be enough power to charge tens or hundreds of millions of electric vehicles in the next 13 years?