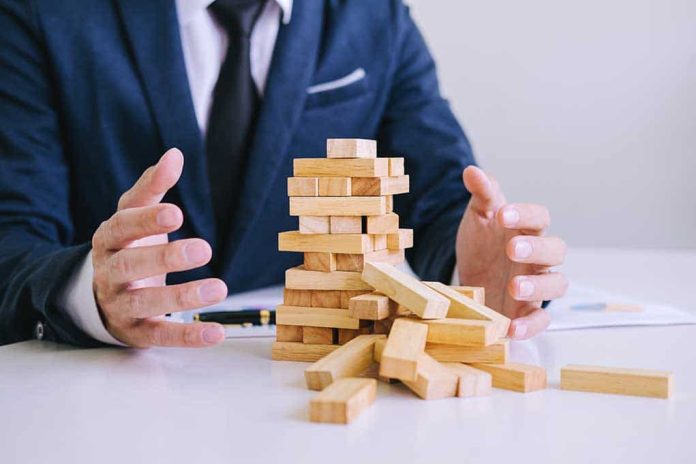 (RightWing.org) – On Wednesday, September 29, moderate Democratic Sen. Joe Manchin (D-WV) delivered on his promise. Over the last few months, the West Virginia Senator stood stubbornly still and declared he could not vote for the $3.5 trillion partisan, “human” infrastructure reconciliation plan put forth by liberal Democrats. They refused to listen to him. Now, the success of Joe Biden’s two-track Build Back Better plan is hanging by a thread.

It’s been a predictable process getting to this point. The Left is desperate to pass their agenda and force it down America’s throat. If passed, it would be the most consequential legislation in American history. The Democrats would transform social programs and education, and enact radical climate change proposals to create a massive cradle to grave government-dependent country. According to Manchin, he won’t stand for it. However, he’s also not saying there aren’t things he won’t agree to do, and a bill could come at a later date. It’s classic Manchin.

In a lengthy letter posted late Wednesday afternoon, Manchin said he made his position very clear to Democratic leaders and the president. If the government can’t pay for Social Security and Medicare, how can we afford to spend trillions of dollars on new, expansive programs? He called the very idea of expanding the social welfare state “the definition of fiscal insanity.”

In addition, the West Virginian hit on several familiar points. Manchin didn’t call the Democrats “socialist,” but he certainly described it and inferred the impact could be significant to America. The Senator argued that massive ongoing government spending would cause inflation to rise even higher, and suggested that it was an “inflation tax.” An inflation tax occurs when the government doesn’t raise taxes legislatively. However, government policies and spending cause the prices of goods and services to rise, which in turn cause consumers to pay more to Uncle Sam for the privilege of spending their money. As a result of less money in consumers’ pockets, the income to the US Treasury Department increases.

The attack on socialism continued. Manchin said a historic expansion of social programs would ignore the economic reality in America. The country is not in a recession, and millions of jobs are available. Instead of a one size fits all social welfare state, Manchin said government aid should only be available to those in extreme need and for a short time.

On taxes, Manchin said the 2017 tax code was flawed. He called for “everyone” to pay their fair share, not just the rich. If Democrats target businesses and the wealthy, the moderate said it would ruin America’s competitive state, hurt jobs, and throw more people onto government dependency. “Overall, the amount we spend now must be balanced with what we need and can afford – not designed to reengineer the social and economic fabric of this nation or vengefully tax for the sake of wishful spending.”

Is Build Back Better Dead?

For the moment and in its current state, Biden’s two-track infrastructure plan is likely dead. Manchin said he would not support the $3.5 trillion package. It’s hard to imagine the Left and Center coming together at this point, given Manchin’s hardline stand.

The Left is seething. After the release of Manchin’s statement, House Progressive Caucus Chairwoman Pramila Jayapal (D-WA) said the Senator “created a bunch more votes on the House floor” against the bipartisan infrastructure plan. She added that the Left would not back down on their socialist program. However, that plan costs trillions of dollars.

Manchin said he hopes for a compromise and could back a reconciliation plan later this year if all sides compromise in good faith. However, it sounds like the only compromise is for Manchin to capitulate to the Left.

Where do we go from here? If the bill doesn’t pass now, it’s hard to envision it passing at all. That’s not to say it couldn’t. Democrats are still Democrats, and once the anger subsides, they could make another run at it.

Manchin concluded his statement by declaring America is a great nation. However, great nation’s go by the wayside when they get careless and enact bad policies. He called on all sides to work together to avoid the mistakes others made in history and create a “better America” for the next generation.

So, is Build Back Better dead?