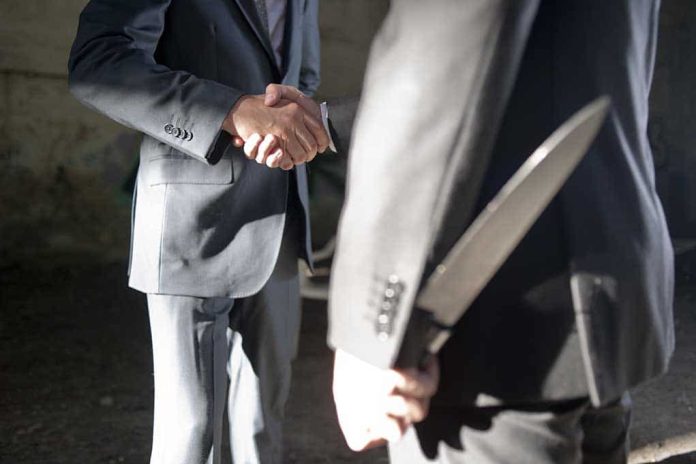 (RightWing.org) – If you’re upset about the Democrat’s power grabs, you’re not alone. In 2020, much of Wall Street and corporate America got behind then-Democratic presidential candidate Joe Biden. Fast forward, and something interesting is underway. As Biden and Congressional Democrats prepare legislation that could transform America, big business is preparing to go toe-to-toe with them in a full-blown showdown.

Corporations, business activists, trade groups, and the US Chamber of Commerce are lining up against the Left, and it appears they are in take-no-prisoner mode. The opposition is massive, and it encompasses multiple industries. As Democrats prepare their go-it-alone $3.5 trillion “human” infrastructure package, a new coalition of businesses is strategizing behind the scenes to halt as much of the plan as they can.

In 2020, it was no secret that much of Wall Street and corporate America backed Joe Biden. That was despite the phenomenal economic conditions that former President Donald Trump created, enabling businesses and workers to thrive right up to the beginning of the COVID-19 pandemic in March 2020. Now, some of those companies may be expressing some buyer’s remorse as Democrats move to strip their profits under the moniker they need to “pay their fair share.”

The industries participating in the movement encompass a wide swath of the business spectrum. Included are big pharma, banks, tech giants, big retailers, and oil-and-gas behemoths.

The US Chamber of Commerce is leading the way in opposition to Biden’s “human” infrastructure plan. The highly influential business group said it would “do everything we can” to prevent the bill’s passage. The business group is ready to fight the massive price tag, policy scope, and cumbersome tax increases the Left hopes to impose on them.

The Chamber, along with its powerful business allies, is considering several methods to kill the bill. Some are traditional, and others are masterfully brutal. In addition to its extensive membership, the Chamber is partnering with other influential groups as well. They were allegedly in talks with the National Association of Manufacturers and Business Roundtable. Together, the companies they represent include Dow, Exxon, Caterpillar, Johnson & Johnson, Apple, Disney, FedEx, Lowe’s, Capital One, Lockheed Martin, and Walmart, among many others.

The only way the Democrats can pass the legislation is if their narrow majorities stay together. That’s nearly impossible as lobbyists descend on Washington, DC, like fire ants on a massive ant mound. The business groups will try to create a pressure campaign unlike any in recent memory.

They intend to argue that the Democrat’s plans will cause families to suffer and jobs to be lost as tax hikes erode cash flow, profits, and valuations.

The business groups are not restricting their efforts to the steps of Congress. They are also going directly to Americans. Television, radio, and internet ad blitzes are on the way. The businesses will do what they do best: target marketing. The group plans to exert pressure by targeting voters of vulnerable Democrats who tend to be more moderate. They will argue that the bill is a socialist’s dream come true.

So, if you live in a district with a vulnerable Democrat, be prepared to learn the other side of the debate. Businesses intend to do their part to educate the public about the destructive legislative proposal.

In turn, get ready to hear about how businesses shouldn’t be involved in politics despite Democrats taking their money.

This will be an interesting strategy to observe.

We’re about to find out.