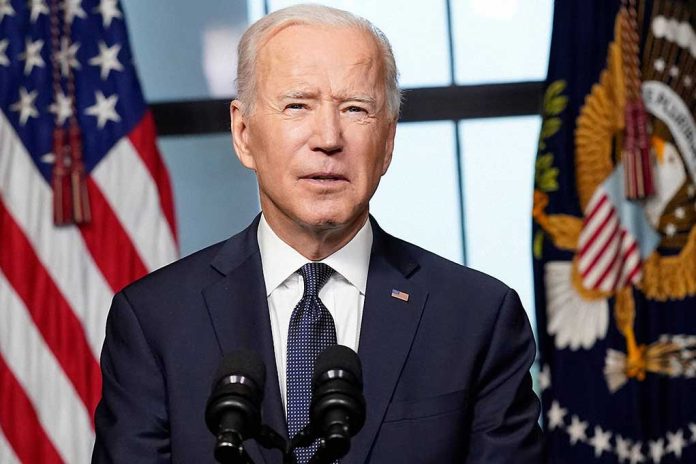 (RightWing.org) – In 1992, Bill Clinton ran for president against popular incumbent President George H.W. Bush. The economy headed for a dip, and many Americans were struggling. Clinton campaign strategist James Carville coined the term, “it’s the economy stupid.” The phrase took on a life of its own and helped lead Clinton to an unlikely victory because he focused on the things that mattered to Americans: their livelihoods.

Fast forward to 2021, and America’s economy is undergoing a potential change in the wake of the COVID-19 pandemic. For voters, it’s all about the economy moving forward as the pandemic takes a rear seat. And there are numerous problems in the financial picture. Last spring, economists expected some temporary inflation as Americans headed out last spring to shop for the first time in a year, but few predicted it would become persistent. What changed?

Today, the most significant problems related to inflation and supply chain challenges are self-inflicted, and President Joe Biden’s reluctance to acknowledge the problems could prevent the government from creating solutions. As Biden’s economy continues to weaken, it could get worse.

The Economy Is Overheating, and the Government Is a Main Contributor

When America woke up last spring, people flush with cash from government stimulus programs began spending money for goods and services that weren’t readily available. No matter how much politicians tinker with the economy, supply and demand is an economic theory that is not debatable. Still, the Biden administration didn’t want to acknowledge, for political reasons, that skyrocketing inflation was more of a problem than they admitted publicly.

On Thursday, October 28, the Commerce Department revealed the situation is going backward, and fast. In the first half of 2021, the economy grew at an unsurprising 6.5%. In the third quarter, it crashed to an anemic 2% growth. Making the economic reality worse, the numbers reflect problems before the supply chain crisis emerged in October.

Consumer confidence in the economy is dropping faster than a lead weight, and inflation is the highest it’s been in over a decade, with economists suggesting it could be late 2022 or longer before it begins to diminish. The main driver is massive government spending in 2020 and early 2021 that totaled over $5 trillion.

Slow Growth and High Prices Are Trouble for Democrats

In the 1970s, stagflation hit America hard under Presidents Richard Nixon, Gerald Ford, and Jimmy Carter. Is America headed for another decade of economic struggles? In 1980, Jimmy Carter lost re-election to Ronald Reagan in a landslide, largely because of economic policies. Carter lost 42 states to the former California Republican governor.

In the 40 years since, inflation has been relatively under control. In the first 10 months of Biden’s presidency, that control has gone out the window. It’s getting to the point that Twitter and Square founder Jack Dorsey believes hyperinflation could be around the corner. Vehicles are harder to find, grocery shelves are empty, and gasoline prices continue to rise. Additionally, millions of Americans are sitting out of the workforce, making it difficult for small businesses and the supply chain to catch up.

Biden’s policies are making matters worse for American consumers. According to economics professor Casey Mulligan, helping people is good, but it’s not free. He argues that the more the government does to help those it hurt during the pandemic, the more low-income people will remain in society. Conversely, the more you help the unemployed, the more unemployment will remain persistent. He added that public policies designed to make layoffs less painful actually make them cheaper and more common.

This is the lesson of economic policies during and after the pandemic that Democrats did not learn. It’s also the root of the economic environment that is being made worse by crippling public policies that hurt workers for not being vaccinated. How many millions of people in the public and private sector could lose their jobs for failing to get vaccinated? Who decided that this was a good way to incentivize public health and sustain positive economic growth?

Is it a surprise that there are 11 million unfilled jobs in America despite rising wages to woo people back to work? In September, almost 200,000 people dropped out of the job market, and 4.3 million workers were missing.

Much like the 1970s, America could be entering an era of stagflation. That’s when slow economic growth, high unemployment, or low workforce participation rates are accompanied by a significant period of inflation. Income redistribution doesn’t solve the problem. As Casey points out, it makes it worse.

Instead of learning their lesson, Democrats continue to double down on “pay your fair share” arguments against the wealthy and businesses. Suppose the Democrats turn their tax philosophy into tax policies. If they do, it could hurt businesses and individuals when workers sideline themselves and don’t use their gifts and talents to make society better through the value of work or entrepreneurship.

In the end, voters will have to put a check on runaway stagflation that Biden and Democrats could make worse. Let’s pray it doesn’t come to that.