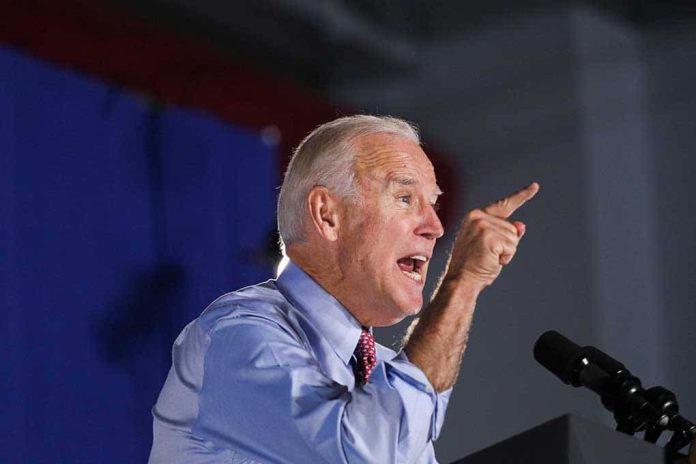 (RightWing.org) – When is enough, enough? At what point does America tune out the crazy talk? For four years, the media criticized former President Donald Trump for stating the obvious. However, what’s coming out of Joe Biden’s mouth isn’t just misinformation; it’s blatant lies. During 2020 and through inauguration day on January 20, Biden vowed to unify the country.

The president is doing everything but unifying the nation. He’s perhaps the most divisive president in modern US history. His behavior is growing out of control. On Monday, July 12, Texas state House Democrats fled to Washington, DC, protesting Texas’ election reform legislation. Biden once again brought Jim Crow out. However, what exactly is in the bill that could be driving this behavior? Absolutely nothing. This is all a political stunt with which Democrats are making it plainly clear they care more about partisan politics than what’s best for the country.

Did Joe Slip on the Stairs of Air Force One Again?

On Tuesday afternoon in Philadelphia, Biden didn’t hold back his reckless rhetoric. Per his usual, customary, inflammatory, and provocative use of words, the president said that Texas and 17 other states enacted 28 new laws “to make it harder for Americans to vote.” He added, “The 21st-Century Jim Crow assault is real. It’s unrelenting. And we’re going to challenge it vigorously.”

Did Joe slip on the stairs of Air Force One again and hit his head?

He must have because he’s losing his mind.

Unfortunately, he’s not alone in the crazy talk. Vice President Kamala Harris praised Texas Democrats for ignoring their duties and fleeing the state to prevent the House from obtaining a quorum. She claimed their action was “patriotic.” So, in the future, if Republicans don’t get what they want, they now have a patriotic duty to leave and prevent a legislative body from achieving a quorum? Somehow, it likely won’t sound that way coming from the Democrats and their allies in the media. Nor should it. Lawmakers should do their jobs and vote on legislation or find another line of work.

What’s in the Texas Election Reform Law that Democrats Object to So Heavily?

During the pandemic, local officials, state election officials, and governors claimed emergency powers to allow voters to participate in elections in ways not prescribed by law. Due to the pandemic, courts generally allowed the measures since they weren’t explicitly forbidden in state or federal law.

So, what’s in the Texas election reform law (which is very similar to the Georgia law?)

Now, how is that Jim Crow or unpatriotic?

After the Civil War, Jim Crow laws were put in place that legalized segregation and denied black voters the equal opportunity to vote, get a job, or pursue an education. How does this law disenfranchise anyone?

It doesn’t, which is why Biden and the Democrats are using harsh language and are taking unprecedented actions. It’s all they’ve got to protect their partisan interests. Even some in the liberal media are calling them out in the process of spewing misinformation and lies. Recently, the Washington Post gave Biden four Pinocchios for invoking the name Jim Crow.

The real question is how partisan is America, and will reasonable Americans see past the heated rhetoric of the Democrats? It appears the GOP is banking on the Dems overplaying their hand.

Only time will tell, but it’s a bet worth banking on.