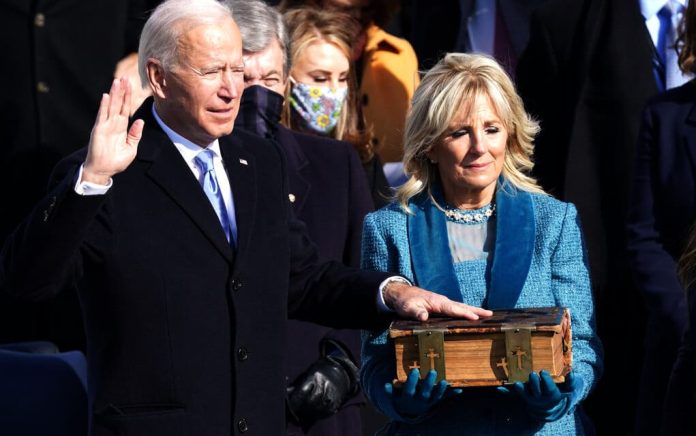 (RightWing.org) – In no other time in US history did a president focus on changing America as quickly as Joe Biden. Former President Barack Obama wasn’t even this radical this fast. A few months ago, the former president warned against going too far left, and it appears the warning wasn’t heeded. Democrats and their agenda for America are finally exposed as actions speak louder than words.

In just 10 days, the new president signed 42 executive orders, and more are on the way. That’s more than double any president in modern US history. During the 2020 campaign, Biden accused then-President Donald Trump of mislabeling him as a progressive sold out to Democratic socialists. Biden denied it and said, “I beat the socialists.”

Obama warned America in 2009 that elections come with consequences. So does winning.

In 10 days, Biden signed executive orders that are likely to kill the energy sector, wipe out untold numbers of jobs, promote biological men over women in sports, and reestablish taxpayer support for abortions. The president is also pitting Americans against one another as he positions the government to pick winners or losers while cloaking it in social justice. He’s now prepared to sign a partisan $1.9 trillion COVID-19 relief package that includes raising the minimum wage to $15 per hour.

Instead of focusing on the urgent problems that require true help to restore the economy, Biden and Democrats are focused on decade-old liberal policies that don’t impact America’s urgent needs.

What Does America Really Need?

Yes, America needs relief. However, the country doesn’t need rhetoric and a liberal agenda designed to buy votes for the next 30 years or more. Better still, Democrats need to stop talking about “following the science” and actually do it.

Schools need to be reopened so kids can start learning again. Businesses need to reopen, and workers need to get back to work. Instead of saying he wants unity, Biden should demonstrate unity. He could do this by forcing Democrats in Congress to cool the baseless, heated rhetoric against conservatives, halt the impeachment trial against a former president, and encourage bipartisan solutions to today’s immediate problems.

Unfortunately, there may be a political calculation to come out this radical agenda executed this quickly. In politics, a year is a lifetime, let alone two or four. There may be a political consideration that Biden is a one-term president with limited time to enact an agenda. By the time the midterms roll out, much of this may be forgotten by voters as they focus on new, important issues of that time.

Then again, perhaps voters won’t forget that this president misrepresented himself and that Democrats are as left-wing as promised.

Well, in 10 days, Biden said a lot. What will the next 1,450 days of the Biden presidency look like?