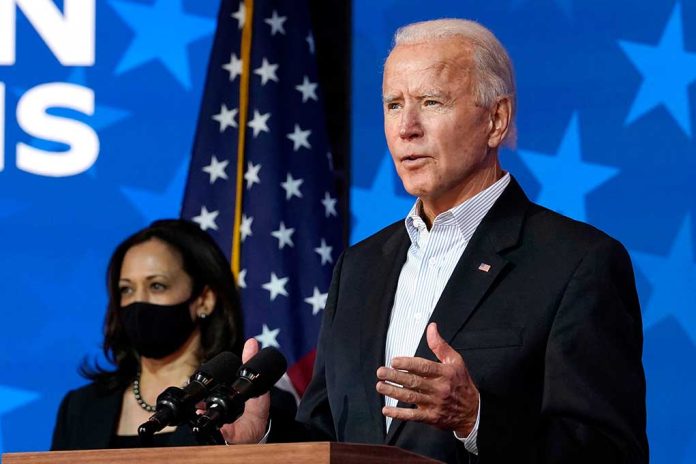 (RightWing.org) – During the 2020 presidential campaign, then-Democratic presidential nominee Joe Biden said that he would be an uniter of the American people. Yet, over the last 16 months, many Republicans believe that President Joe Biden has been unnecessarily divisive in both his rhetoric and actions. The latest salvo came on Wednesday, May 25, as the president announced a new executive order (EO) aimed at creating police reforms.

President Biden’s signing ceremony of an EO on police reform at the White House came two years after George Floyd died at the knee of former Minneapolis police officer Derek Chauvin, who is now a convicted murderer. Floyd’s family was in attendance as Biden struck partisan tones against Republicans, despite championing rules that GOP Sen. Tim Scott (R-SC) proposed in 2021 that Democrats shot down.

The order titled Executive Order on Advancing Effective, Accountable Policing and Criminal Justice Practices to Enhance Public Trust and Public Safety seeks to improve accountability in policing. Yet, the EO only applies primarily to federal law enforcement. The federal government has little Constitutional authority over state and local police according to the 10th Amendment, but that doesn’t mean Biden won’t try to find a way to twist their arms by using the purse of the federal government to force them into adopting these changes.

During the signing ceremony, Biden took time to lambast Republicans. The president said that while the Democratic-led House passed police reforms, Republicans in the Senate opposed meaningful changes. As a result, the president said he needed to go it alone while also recognizing the limits of his authority absent legislation from Congress.

Republicans Hit Back Over False Allegation

On Wednesday, Sen. Scott issued a blistering rebuke of Biden’s characterization of the GOP and sought to turn the tables. In 2020, the South Carolina senator introduced a police reform bill in the Senate that Democrats overwhelmingly rejected. Although Scott is a black senator, Democrats alleged his legislative proposal was racist. Yet, Biden’s EO included many of Scott’s so-called racist reforms.

Scott said the current crime wave was a direct result of the defund the police movement and that Biden’s EO solution was a partisan approach that utilized the exact same policy proposals the Senator wrote in the JUSTICE Act. He said the Democrats filibustered a proposed law they called racist only to secretly embrace it two years later.

In addition, Scott said Biden’s EO set up federal law enforcement agencies for failure by issuing unfunded federal mandates that would only make the job of federal police more difficult.

Scott wasn’t alone. National Police Association spokeswoman Betsy Brantner Smith said on Fox News that the EO was a declaration of war on law enforcement and called it political theater as the rules only pertain to federal law enforcement.

As America digests the consequences of Biden’s EO, more is bound to come out about the practical impact on law enforcement’s ability to serve the country and communities.