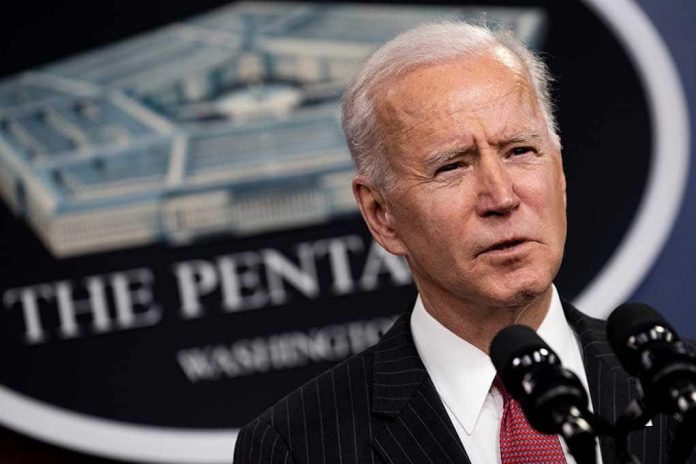 (RightWing.org) – Concerns are growing as many Americans wonder, who’s running the government? Whenever President Joe Biden speaks, he carries cards with predetermined answers or comments that suggest someone won’t allow him to answer questions. When he does answer a question, the White House spends considerable time re-answering for the president and cleaning up his alleged misstatements. Or, are they really misstatements?

The most recent fiasco occurred on Wednesday, November 3, when a reporter asked Biden about a Department of Justice (DOJ) negotiation with illegal immigrants that could cost taxpayers a reported $450,000 payout per illegal minor and an additional $450,000 for parents. That’s almost $1 million for people who broke America’s immigration laws. The American Civil Liberties Union (ACLU) is representing thousands of illegal minors and their families over forced separations in 2019. The president said the story was garbage and that it wasn’t going to happen. On Thursday, the White House seemed to contradict him. So, what’s the truth?

In 2018, the Trump administration declared a so-called zero-tolerance immigration policy. At the time, parents of minors, human traffickers, and others, found a loophole and sent kids across the US border. Of course, there was no way to know how many parents were actually with the kids. Then-Attorney General Jeff Sessions stated if someone smuggles a child across the border, the government will prosecute them and separate children from the adults. He added that if someone didn’t want a child to be separated, don’t bring them across the border.

Now, government attorneys are negotiating settlements with approximately 940 illegal immigrants who broke US immigration laws. The news infuriated Republicans who note that Trump’s immigration policies curbed unlawful immigration and cut down on human and sex trafficking.

After Biden’s declaration that the government wouldn’t pay out the money and that the story was garbage, the White House intervened. On Thursday, spokeswoman Karine Jean-Pierre said the president is comfortable with the Justice Department settling the cases with illegal immigrants suing the US federal government with aid from the ACLU. Jean-Pierre added that Biden wasn’t saying the settlements wouldn’t happen. Instead, he suggested they wouldn’t get $450,000.

That’s Not What Biden Said

Yet, the questioning by Fox News White House correspondent Peter Doocy was very specific, and Biden specifically answered the question. Biden stated the whole story was garbage. So, either he didn’t know what his DOJ was doing, or he spoke his mind without his handlers to answer for him. In either case, that’s a significant problem.

So, did Biden speak his mind saying the deal wasn’t going to happen, or did he mean the illegal immigrants will get less than $450,000?

Given the administration acknowledges they are unwilling to defend America at the southern border or from illegal immigrants who, once in the country, get taxpayer benefits in housing, food, and healthcare allowances, does it even matter?

It really doesn’t matter at this point what he meant because no one knows. It’s becoming an all too familiar pattern. At this point, all that matters are the policies that continue to harm American taxpayers one way or the other. It appears that won’t stop until a new president puts an end to the madness.