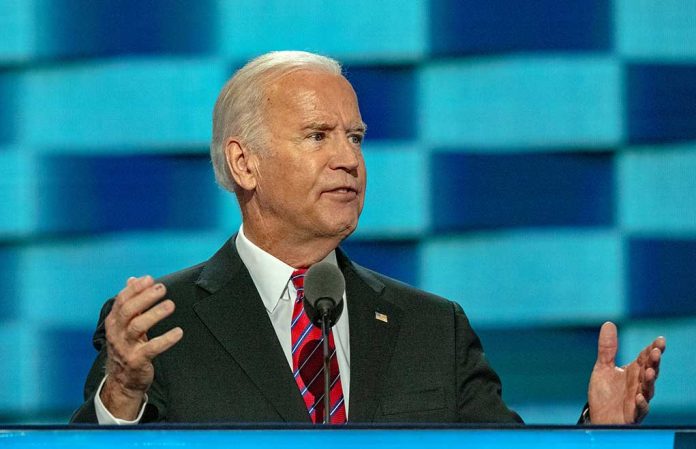 (RightWing.org) – President Joe Biden and the White House are doubling down on their misinformation campaign against election reform laws. They must be hoping their repeated lies stick as the Democrats HR 1 bill to federalize elections is doomed to fail in the Senate without 60 votes. On Tuesday, April 6, Biden repeated the untruth that the Georgia law, and others like it, are “Jim Crow” laws designed to hurt minority voters. Additionally, White House Press Secretary Jen Psaki said the Georgia election reform law was built on a lie.

If that’s not the pot calling the kettle black, what is? Nonetheless, the Democrat’s misinformation campaign has been chronicled and compared to Democratic stronghold election laws in New York that are even more restrictive. Unfortunately, on Tuesday, Biden doubled down and all but threatened Georgians or other GOP-led states for that matter.

They Better Smarten Up!

On Tuesday, the president was asked if the Masters PGA golf tournament should leave the state over the election law. While Biden didn’t say if it should or shouldn’t, he said he respected businesses who leave over these “new Jim Crow laws.” Does he even know what Jim Crow laws were designed to do? They were created to explicitly stop black Americans from voting after the Civil War using poll taxes and other forms of intimidation, and terrorizing people legally. Georgia didn’t do that in this bill; in fact, it expanded voting rights.

But, it got worse. Biden then said if Georgian’s don’t like it, they better “smarten up.”

Think about what he’s saying. It’s condescending that a sitting President of the United States would try to bully Americans. This is what Biden accused Trump of doing, except Trump never attacked the people, though he certainly went after politicians he didn’t agree with.

What Biden did is nothing short of bullying and intimidating the public by threatening people with their livelihoods. In Atlanta, the people that Biden claims to champion are the ones being hurt the most over Major League Baseball moving their all-star game to Colorado. Over $100 million evaporated from their local economy where black Americans make up over 50% of the population affected by the decision.

Perhaps It’s Democratic Strongholds That Need to “Smarten Up?”

How are Democratic, far-Left policies increasing opportunity for anyone while reducing people’s reliance on the government? How are the poor and middle class incentivized to move up the ladder of hope and opportunity through wild government spending that is followed up with massive taxes to pay for it? How are women’s rights advanced when transgender men are allowed to compete with women in “women’s” sports? The list goes on and on.

One would think the COVID-19 pandemic would wake some people up. Perhaps the awakening will begin as Biden talks from the heart what Democrats silently thought of people for decades in their minds.