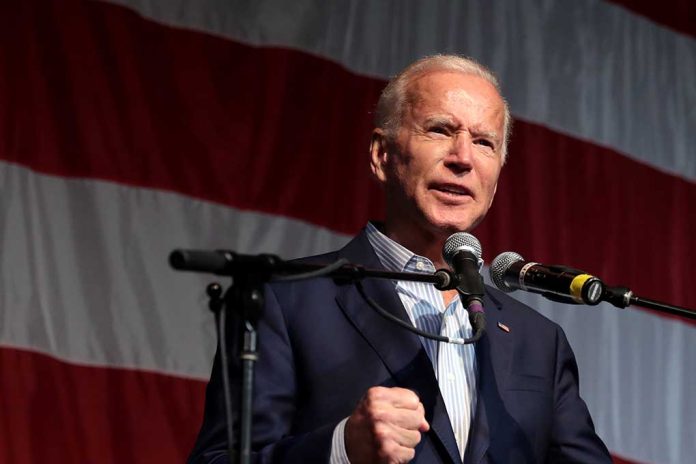 (RightWing.org) – Is it possible that President Joe Biden is turning America into a banana republic? On Wednesday, January 19, the president met with reporters for nearly two extraordinary hours. At times, Biden showed a lack of empathy, understanding and the ability to grasp basic facts. Anger and contempt were also emotions he expressed. Perhaps more alarming, since April 2021, the president has had an opportunity to correct his false narrative that GOP-led states are trying to suppress minority voters and are akin to Jim Crow laws — he hasn’t.

If Biden ever wanted to work in a bipartisan fashion, he destroyed that opportunity by doubling down on his own Big Lie. His recklessness is now endangering the country and its future. He has sown division in a way that no president before him has even come close to. From 2016 to 2020, Democrats excoriated Donald Trump for questioning the controversial 2020 presidential election results. Yet, Joe Biden is already alleging illegitimate claims ahead of two elections that haven’t even occurred yet.

Two weeks ago, President Biden visited Georgia and said that if lawmakers don’t get on board with his agenda to federally hijack elections, they were comparable to segregationist George Wallace and racist Bull Conner. On Wednesday, he took it a step further ahead of a Senate vote to carve out the filibuster to pass the Democrat’s election rules changes. Not only are those who don’t agree with him racists, but the elections are also illegitimate.

Those are his words. When asked if he would reject the outcome of the 2022 and 2024 elections as illegitimate, the president stated:

“It all depends on whether or not we’re able to make the case to the American people that some of this is being set up to try to alter the outcome of the election. . . . I think it would easily be illegitimate. The prospect of it being illegitimate is in direct proportion to us not being able to get these reforms passed.”

Biden’s statement was not a slip of the tongue or an accident. Democrats are playing with fire by alleging Republicans rigged the upcoming elections. This dangerous rhetoric could create an unstable environment as the entire system is built on election integrity.

It’s Nothing New for Democrats

It’s an odd thing. Democrats blasted Trump for questioning the 2020 election when he had good reasons. Just this week, a Wisconsin judge ruled that 500 ballot boxes throughout the state were illegal and violated state law. These were the exact issues that Trump and his lawyers fought from November 2020 to January 20, 2021. The courts wouldn’t listen then, but some are now. There may be even more cases in the near future.

Biden committed the ultimate act of partisan aggression: claiming a bald-faced lie that Republican-led states are trying to suppress votes without any proof. Then, Biden told reporters that 2020 had the most votes in the country’s history, and offered evidence there was no suppression.

So, here’s the question: did Biden admit that Democratic-led states corrupted the 2020 election and that America needs the federal government to take them over? Or, did he recognize the voting bill wasn’t necessary? He literally said even if the GOP made voting harder for minorities, people would still stand in line to defy suppression. Biden then added that the upcoming elections wouldn’t be free or fair if his radical election rules bill fails.

Does this really make sense to anyone?

Unfortunately, this kind of rhetoric isn’t new from Democrats. In 2020, Biden said the only way he would lose was if there was “chicanery” happening at voting polls.

Joe Biden just now in Erie, PA: "The only way we lose this is by the chicanery going on with regard to polling places.”

There are hundreds of stories of Democrats and the liberal media exclaiming that both Bush and Trump won illegitimate elections.

Why is Biden getting ahead of the curve with his pronouncement before a vote even occurs? It’s simple… the American people have stated in poll after poll that they no longer trust the president or Democrats. Independents are fleeing in droves, and the writing is on the wall. The only way that Democrats believe they can salvage their future is to hijack it before it happens.

Democrats will not accept that America isn’t on board with their liberal agenda. So, voters didn’t vote against them – Republicans cheated. That’s their standard mode of operation. You can expect leading up to the November midterm elections that Democrats will try to undermine voters with baseless allegations that Republicans rigged elections and that the winners are illegitimate.

It’s disgraceful, and America should reject the message forcefully.