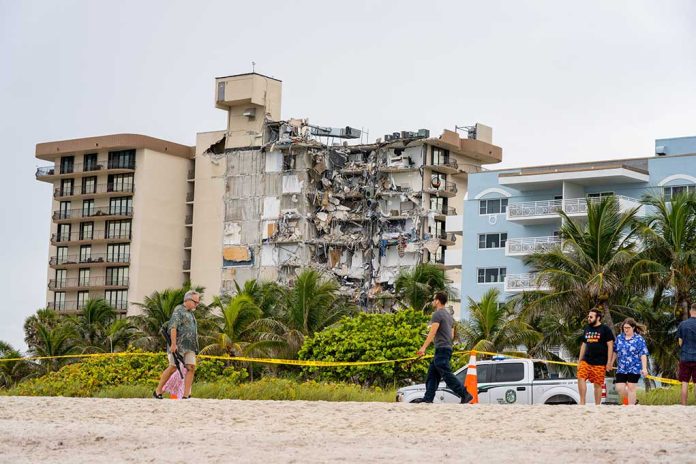 (RightWing.org) – As a massive rescue operation continues after the tragic collapse of a residential building near Miami, one senior Biden official is already politicizing the tragic event. On Friday, July 2, rescuers discovered 2 victims including the 7-year-old daughter of a Miami firefighter, bringing the total deaths to 20 people. Still, over 140 people are not accounted for after 55 residential building units crashed down on Thursday, June 24.

At this point, no one is certain what caused part of the building to come crashing down. Allegations are swirling of shoddy construction and maintenance neglect. On Wednesday, June 30, Energy Secretary Jennifer Granholm offered an unsurprising answer. It’s one only the Left with an agenda would state. She claimed the answer could be climate change.

For the Left, climate change is a religion. For Democrats, it’s lurking behind every tragedy, and everything is a political agenda. Opportunity knocked, and Granholm couldn’t resist. Climate change is vital to the Democrat’s plans. Biden is doing what he can to ensure the demise of the fossil fuel industry. He’s on board with the Green New Deal and is trying to pass much of the Left’s climate control initiatives. There must be a reason to spend trillions upon trillions of taxpayer dollars and increase an ever-growing out-of-control federal debt. If one needs proof, the Democrats will find it.

Here we go again. Keep in mind that Secretary Granholm is not a scientist nor an engineer. On Wednesday, Granholm was asked on CNN if climate change contributed to the building’s collapse. On the one hand, she stated, “we don’t know.” On the other hand, she claimed that the “seas are rising” and that inches of beaches are being lost.

Democrats never let a good crisis go to waste. Regardless of the condition of the building and the reason for the tragedy, Grahnolm pushed Biden’s infrastructure green initiative agenda. She stated that sea walls need to be constructed, levees built, and more infrastructure spending is necessary to stop this from happening again.

She said she hoped the infrastructure “bills,” not a singular bill, would be a “huge step and allow America to lead again.”

Is that true? Did rising sea rates due to climate change cause the calamity?

The collapse of a high-rise building isn’t something one sees every day. It never happens. If climate change is to blame for this building’s failure, what about all the buildings near it that didn’t collapse? What about all the structures up and down the US east coast?

Rumors of shoddy construction, lack of structural reinforcements, and water damage from rain are more likely to be the problem. Just two days before the building crashed down, a contractor photographed structural damage in the garage of the building. There were significant cracks in the concrete, corroded exposed rebar, and standing water.

Perhaps Democrats should avoid politicizing the tragedy while a rescue is underway. Facts are stubborn things. Can’t we allow an investigation to start and finish before politicians become subject matter experts and make declarations?

Could Democrats Use Climate Change to Shutdown America?

The danger in all of this can be found during the COVID-19 pandemic. If you think locking down America over the pandemic was terrible, that could be nothing. It’s not hard to imagine the government shutting everything down over a climate crisis emergency declaration and trying to regulate everything.

They did it once. There is precedence. What’s to stop Democrats from doing it again under the guise that we are in a climate crisis?

All they need is a good cover.