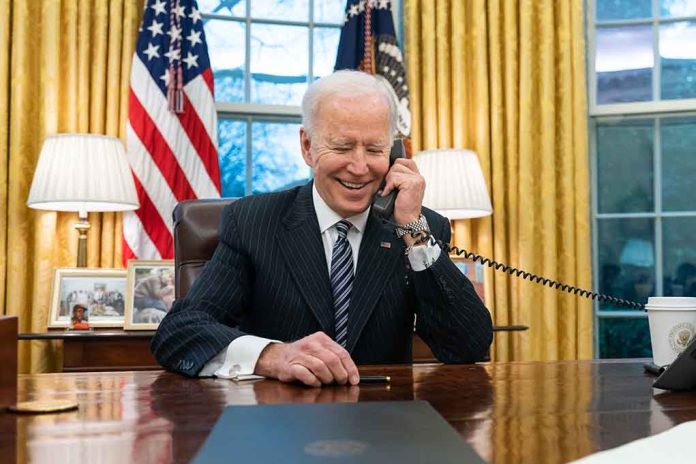 Biden Sends Thank You to Coast Guard Diver Before Firing Him

(RightWing.org) – President Joe Biden has personally called a Coast Guard hero to thank him for his bravery during Hurricane Ian. The rescue swimmer saved at least two lives as storm winds and floods swept over Florida. He won’t be doing that in next year’s hurricane season, though, because Biden’s vaccine mandate means he’s weeks away from being fired.

Biden Thanks Heroic Coast Guard Rescuer He's About to Fire for Being Unvaccinated https://t.co/FoML1gIgpK

Hurricane Ian hit the Florida coast on September 28, killing over 100 people and spreading devastation across huge swathes of the state. As winds of up to 132 mph and heavy rain caused chaos, Coast Guard rescue swimmer Zach Loesch was in the thick of it. In one daring rescue, the aviation survival technician second class, descending from a hovering helicopter on a winch cable, rescued a disabled woman and her husband by kicking through the wall of their house to get them out — then went back into danger to collect the woman’s wheelchair. He also risked his life several times to rescue lost pets from the floodwaters.

Last Friday, Biden called Loesch to thank him for ”the heroic work” he and other Coast Guardsmen carried out during the storm. Loesch, of course, was too polite to bring up the fact that under Biden’s controversial Armed Forces vaccine mandate, he’s due to be dismissed from the Coast Guard between 30 and 60 days from now.

Loesch says he applied for a religious exemption from the mandate but was denied. He appealed, but that was denied, too. Now, he’s facing administrative discharge. “I just love my job,” he said. “I feel like this is the job that I was born to do” — and the people he saved last week would undoubtedly agree. Unfortunately, Biden won’t let him do it anymore.