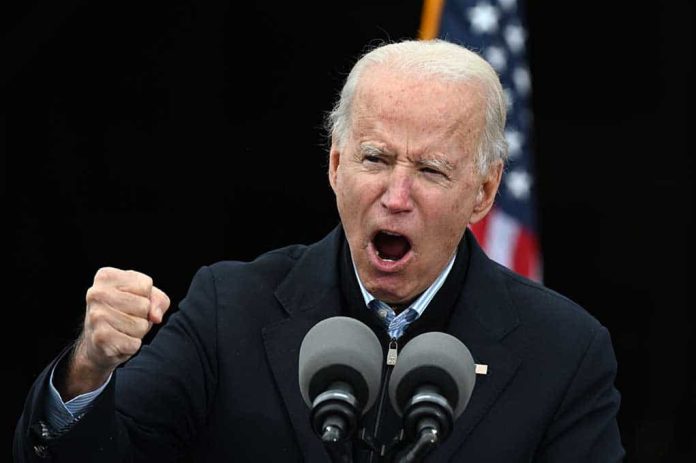 (RightWing.org) – On Thursday, March 25, during President Joe Biden’s press conference, the president had a few choice words for Republicans working to shore up election laws and instill confidence in voting systems. Instead of getting worked up over migrant kids packed into detention facilities and spreading COVID-19, he doubled down on an issue that could prevent Democrats from manipulating votes.

Biden is deeply misinformed, and the statements he made would likely get labeled as misinformation or disinformation if they came from former President Donald Trump. Biden claimed that reforming election laws is “sick” and “un-American.” The president claimed that people couldn’t bring food or water to people standing in line to vote. Biden added that Republicans will end voting at 5:00 p.m., just as people are getting out of work, and that there won’t be any absentee ballots.

Claiming to know Republican voters, Biden got virtually everything wrong he ranted about. So, let’s look into it.

The media is joining Biden in alleging that Republicans are trying to suppress the vote to their advantage. However, if the president wants to talk about an “un-American” proposal, one needs to look no further than HR 1. Labeled as the “For the People’s Act,” Democrats would nationalize federal elections and strip the right from states to conduct their own elections as they see fit. Instead of clarifying election laws, Democrats want to make voting more confusing. In the process, the Left would create a free-for-all that would empower bad actors to cheat in elections at a scale never before seen.

So, are Biden’s allegations against the GOP true? Are they really “sick” and “un-American?”

On Thursday, March 25, Georgia Republican Gov. Brian Kemp signed into law sweeping election reforms. It requires absentee voters to provide photo ID, increases dropbox security, and proposes changes to mandatory early voting dates. The governor said the reforms were desperately needed after the challenges of the 2020 election led to a “crisis in confidence at the ballot box.”

Biden claimed people are not allowed to receive water or food while standing in line to vote. Let’s look at that a bit closer because that’s not accurate. The Georgia law says that campaign workers and supporters can’t solicit votes, show campaign materials, or provide gifts (including water and food) within 25 feet of voters standing in line at a polling place.

Nowhere does it say that people can’t have food or water. It doesn’t prohibit non-political groups from handing out water or food to those in lines, and it doesn’t prevent people from walking 25 feet to grab a bottle of water if they are thirsty.

The president’s handlers need to research more closely on this fake claim. Biden must be alluding to a Texas proposal that would close early voting at 5 p.m. during the first week of early voting in the Lone Star State. In the second week, early voting would be open until 7 p.m. and the state law would make it uniform. The proposal does not change election day voting.

It’s not clear where Biden got this one. States are not eliminating absentee ballots. However, what they are doing is cleaning up problems related to no-excuse mail-in voting that crippled the 2020 election and created enough questions to erode voter trust.

In Arizona, a new law requires the Secretary of State to compare death records with voter registrations and remove deceased voters, plus an annual review to clear out the names of those who passed away.

In Iowa, a new law requires all absentee ballots to arrive in the mail before polls close on election day. It also prohibits election officials from mailing out absentee ballots unless a voter specifically asks for one. It also stops people from collecting ballots from voters and submitting or mailing them on a voter’s behalf.

So, this is what President Biden is calling “sick” and “un-American?” What’s sick is HR 1, which is being debated in the Senate and heavily supported by Biden.

America is quickly becoming two countries. One where Democrats want a free-for-all because the confusion benefits them. The other is where Republicans want well-defined rules that offer clarity and a clear voting process that voters can trust.

Which seems more “sick” and “un-American” to you?