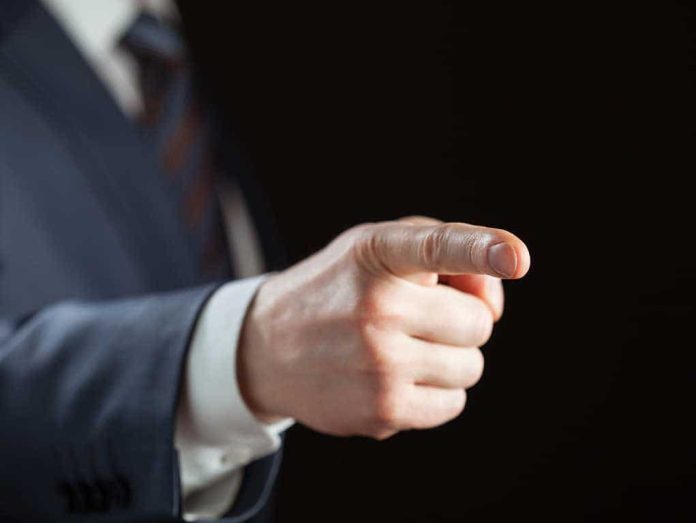 (RightWing.org) – Finger wagging is a time-honored tradition for politicians on the defensive. One of the most memorable was when President Bill Clinton stood at the White House podium, wagged his finger, and stated that he did not have sexual relations with that woman, Ms. Lewinsky. Ah, but he did, and the stain on the dress proved it.

While Joe Biden is no Bill Clinton in virtually any way, he has a finger, and he loves to use it when he scolds Americans or feels defensive. As gas prices soar, inflation skyrockets and store shelves remain empty, Biden should feel defensive. The president helped get us in this mess. Yet, it’s astonishing that Biden is ready to blame everyone but himself for the problem he caused, and he wants to know why his approval ratings are in the tank?

So, instead of acknowledging he made a mistake or a wrong decision, the president wants to play the blame game. Perhaps that’s not fair… maybe he believes his decisions were the right ones, and he’s doubling down. Either way, it’s still largely on him.

Before Biden assumed office on January 20, the United States was 100% energy independent thanks to President Donald Trump. He worked with energy companies and deregulated where appropriate to spur US innovation to meet America’s energy needs. During the 2020 presidential election, Biden said he would do the opposite. The then-Democratic candidate declared he would eliminate fossil fuels. He hasn’t abandoned his promise, and America is paying for it.

Once in office, Biden immediately went to war with US energy companies by shutting down a pipeline project, and now he’s considering shutting down another. The president also instituted harmful and expensive regulations, and more are on the way.

When gas prices started to climb rapidly over the summer, the president didn’t turn to US companies to solve the problem. Instead, he turned to OPEC and asked them to increase production. Somehow, their oil doesn’t harm the environment, but ours does?

Biden Blames Energy Companies and Calls on FTC to Investigate

On Wednesday, November 17, Biden did the unthinkable. Instead of reversing course to alleviate gas prices, he doubled down. He called on the Federal Trade Commission (FTC) to investigate anti-consumer behavior by energy companies.

Biden alleges that evidence is growing that oil and gas companies are artificially driving up gasoline prices. The proof, he says, is that Exxon and Chevron nearly doubled their income compared to 2019. To anyone who paid attention, that might make some sense. In 2019, the companies were extracting oil and natural gas all over the country. Does anyone believe that’s cheap to do? Now that they are sidelined by the administration, of course, revenues are up compared to expenses.

This is a poor attempt to deflect attention on the big bad oil people. It’s a move of pure desperation from an administration that has nowhere to turn for help. The industry doesn’t have a relationship with anyone inside the Democratic administration. Worse still, Democrats lack the knowledge to respond to the energy crisis. Their answer is to dog energy companies and claim they’re evil while suggesting that Americans don’t need them. All the country needs are renewable energy sources.

How’s that working out in California?

Instead of pointing fingers, perhaps Biden should admit when he’s wrong and start talking to people who know about energy and what to do to solve the crisis he created.