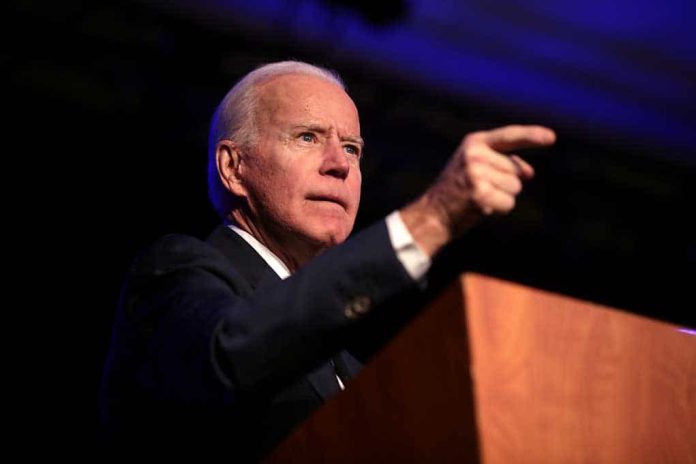 (RightWing.org) – The level of desperation among Democrats is growing as moderate senators seize control of the Left’s agenda. It was only a matter of time before the giddy Leftists confronted legislative reality. Governing and campaign demagoguing are not the same things, and one shouldn’t make promises they can’t guarantee. Yet, for months, President Joe Biden, House Speaker Nancy Pelosi (D-CA), and Senate Majority Leader Chuck Schumer (D-NY) continued to make overtures to the Democratic far-Left base that their dreams were about to become a reality.

Now, they are trying to cash a check, and the money isn’t in the bank.

On Wednesday, Biden summoned moderate Democratic Sen. Joe Manchin (D-WV) to the Oval Office. Apparently, the president thought Manchin wasn’t completely serious about his intention to scale back the $3.5 trillion “human” infrastructure proposal working its way through the go-it-alone partisan reconciliation process. The president was wrong. Now that Manchin is proving he’s not backing down, Biden is changing his negotiation strategy. If Manchin doesn’t join him voluntarily, perhaps the president can manipulate the Senator into joining his cause.

On Wednesday, Manchin held firm in a one-on-one meeting with the president, and said he would not budge on his position. For months, the West Virginia senator stated his opposition to the Democrat’s heavily priced bill. For the last two weeks, the moderate argued the government could not afford a massive bill and he wouldn’t vote for it under any circumstance. While Manchin isn’t saying it publicly, reports suggest he’ll support a $1.5 trillion bill.

Let’s give him credit; Manchin is holding true to his word.

In an evenly divided Senate, Democrats cannot afford to lose a single member. If it does, the reconciliation package is dead. Manchin told a desperate president to his face that he would not vote for the bill. Without it, Biden’s presidency could be relegated to a lame-duck status, especially if the GOP wins one or both chambers of Congress in 2022.

Worse yet, it’s a massive defeat to the Left, who wanted a $6 trillion deal while saying they compromised enough at $3.5 trillion. Democratic radicals declared if they don’t get the $3.5 trillion proposal passed into law, they will torpedo the bipartisan infrastructure deal passed by the Senate in August.

Biden Goes on the Offensive

With little in the way of political capital and being largely sidelined, Biden is taking his case to Democratic voters. Perhaps he hopes that he can convince deep-red West Virginia to his cause? Good luck with that. The reality is that Manchin isn’t accountable to Washington, DC. He’s accountable to voters in West Virginia and their interests, which don’t align with the Left.

In 2020, the state voted nearly 70% for Donald Trump. Republicans hold every major office, except for Manchin’s Senate seat. No matter how much pressure the Left applies, it can’t overcome the political reality in West Virginia.

So, what is Biden’s new tactic? He wants America, and West Virginia, to believe that moderates who hold out on the $3.5 trillion plan are sellouts to the middle class. In a speech on Thursday, Biden overtly stated that either moderates could help working-class Americans or they can continue to hurt them with the status quo.

Biden’s position is a ruse. From 2017 to early 2020, when the pandemic hit, former President Donald Trump overturned the Obama/Biden administration’s policies, and the economy exploded. Between tax cuts and eliminating regulations, there were more jobs than people to fill them. Wages were on the rise for the middle and lower class. Under Biden’s leadership, inflation is out of control, resulting in less money in people’s pockets. In addition, trillions of dollars in tax proposals will ultimately hurt those the president claims he wants to help.

In short, Biden is losing and desperate to do whatever he can to change his fortunes. It’s likely too little, too late. The president has little political capital in the halls of Congress. The Democratic Party is at war with itself, and Biden will become a casualty.

For Conservatives, this is as good as a great movie. Still, anything can happen. Nothing is over until reality sets in or reality changes. So, sit back, get a drink, and enjoy some popcorn. The show is just underway.