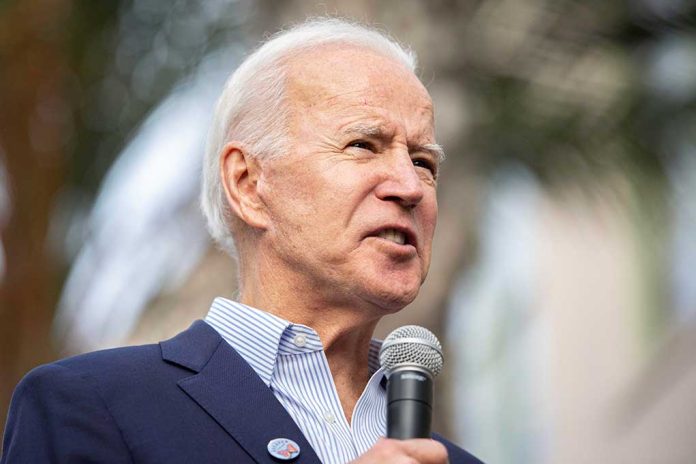 (RightWing.org) – Rising inflation is one of the most visible failures of the Biden administration so far. To combat the high gas prices that are driving it, the president has authorized the biggest ever release of oil from the Strategic Petroleum Reserve (SPR). There’s just one problem — he’s not allowed to do that.

What Is the Strategic Petroleum Reserve?

The SPR is an emergency reserve of crude oil — the largest in the world — maintained by the Department of Energy (DOE). The oil is stored in huge underground caverns that were created by drilling into natural salt domes, dissolving the salt with water, and then pumping it out and filling the caverns with oil from nearby wells. There are currently four storage sites, two in Texas and two in Louisiana, and between them, they can hold 714 million barrels of oil — enough to meet US demand for 29 days, if they are full. Unfortunately, they aren’t full. In early April, there was a total of 566.7 million barrels in storage, less than 80% capacity.

Where Have Our Reserves Gone?

In 2009, the SPR storage facilities were all filled to their maximum capacity, as they’re supposed to be. However, Congress, figured out that it could raise some cash by selling off oil from the SPR. Between 2017 and 2020, Congress passed bills mandating the sale of 132 million barrels. Then, President Joe Biden came along, and the volume of SPR oil sales went through the roof; last November, he sold 50 million barrels, and in early March he sold another 30 million. Then, in late March, he authorized the sale of a massive 180 million barrels over 6 months. When that’s gone, the reserve will have shrunk to well under 400 million barrels — around 55% of what it should be.

What Does This Mean?

Constantly removing oil from the reserve damages the storage facilities. The SPR Office estimates that every 100 barrels of oil pumped from the caverns brings 15 barrels of dissolved salt with it, weakening the walls of the caverns and undermining their structure. If oil is withdrawn too often, the storage facilities — which cost $4 billion to construct — could become unusable.

There are economic dangers, too. When the reserve was replenished in the past, the SPR Office did it by quietly buying cheap oil every time the price hit a low. Unfortunately, that’s apparently too sensible for the current administration. On May 4, the DOE announced it plans to buy 60 million barrels of oil this fall to start replenishing what Biden has sold. The announcement immediately pushed oil prices even higher. Right now, Biden is selling oil that the government bought at an average price of $29.70 a barrel. Right now, the price is $112 per barrel — and there’s no guarantee it will be any lower in the fall, especially when traders know the US government is committed to buying 60 million barrels. Economically, Biden’s scheme is madness.

Worst of all, the president doesn’t even have any right to do this. The SPR was set up by the 1975 Energy Policy and Conservation Act, which authorizes the withdrawal of oil from the reserve to counter oil shortages on the global market. There’s no shortage of oil — it’s just expensive. Unfortunately, since taking office, Biden’s green agenda has blocked the expansion of US domestic oil production, forcing us to buy more expensive imported oil and kick-starting inflation. Right now, Biden is plundering our strategic oil reserve and planning to replace it at over three times the price. Instead, maybe he should stop blocking pipelines and drilling projects.