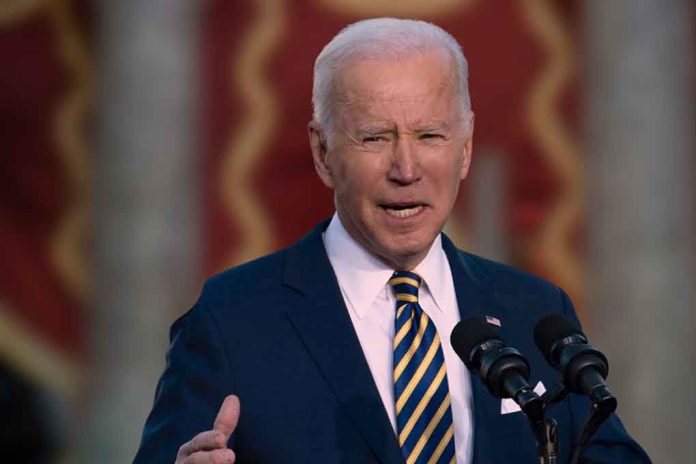 (RightWing.org) – President Joe Biden began dismantling his predecessor’s policies on his first day in office, issuing 15 executive orders. Several rescinded Donald Trump’s actions to secure the nation from the problems associated with illegal migration. For instance, he terminated the former president’s emergency declaration at the US-Mexico border and wiped out funding diverted for border wall construction. He recently delivered the GOP’s worst nightmare.

On January 5, Biden delivered a speech about border security and enforcement at the White House’s Roosevelt Room. He began by boasting about his “comprehensive” overhaul of the nation’s immigration system dating back to January 2021. Then, as one might expect, he blamed Republican lawmakers for the failure of his immigration and border security policies.

Biden claimed the GOP rejected his recent request for additional funds to secure the nation’s southern border. Likewise, he accused them of refusing to provide adequate taxpayer dollars to cover the hiring of thousands of “new asylum personnel and a hundred new immigration court judges.” Digging in his heels, he said the Republicans’ failure to bankroll his plan “increased the challenges” facing Americans at the nation’s southwest border.

The president started rambling about the plight of individuals fleeing from Central and South American countries and the Caribbean to escape oppressive dictatorships and mounting gang violence. He said the immigrants from Cuba, Haiti, Nicaragua, and Venezuela account for most people attempting to cross the nation’s southern border.

Then, Biden delivered a knockout punch to American safety and security. He announced that his administration would extend its relatively new “parole program” for Venezuelans to include Cubans, Haitians, and Nicaraguans.

The president could announce a legal pathway for migrants from Nicaragua, Cuba and Haiti into the U.S. as the Republicans fail to find the next House speaker. https://t.co/sCDytWEmsU

Here’s how it works. An applicant must first obtain a “lawful sponsor” in the US to help facilitate their assimilation into the country. Then, after passing a background check, they can present their approved applications to officials at any port of entry using a smartphone app. At that point, they can legally work in the US for up to two years. Biden didn’t explain what happens at the end of the period.

Republican Senators Chuck Grassley (R-IA) and Jim Jordan (R-OH) pushed back against that policy in a November 2022 letter to Homeland Security Secretary Alejandro Mayorkas, calling it “misguided” and a “flagrant violation of immigration law.” They also raised issues about the sponsorship requirement, stating it raises serious questions regarding what happens if a parolee’s supporter leaves the US.

What do you think about Biden’s proposal? Do you think it provides adequate protections for Americans and legal immigrants against the ravages of a rising tide of illegal migrants?