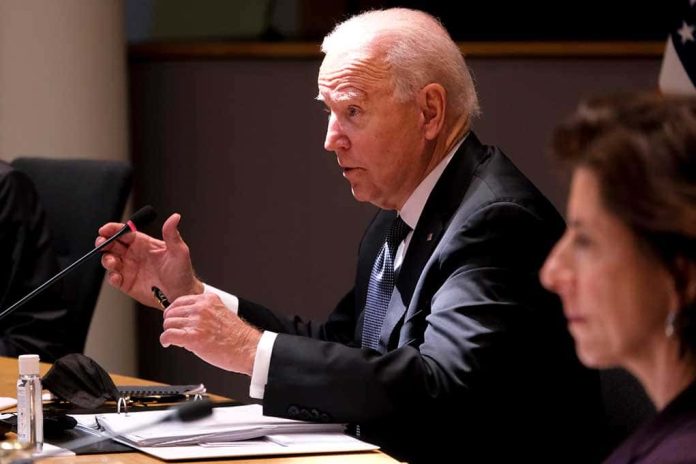 (RightWing.org) – The government appears intent on dividing America into a state of “us versus them.” The vaccinated versus the unvaccinated. Living comes with a high degree of risk. People assume it every day when they wake up in the morning. Driving a car comes with risks. Eating at a restaurant can be risky. Depending on the government to provide for one’s day-to-day needs is perhaps the riskiest proposition of all.

The COVID-19 vaccinations are no different. They too come with a risk. The question each individual must decide for themselves is, does the risk outweigh the alternative? Only the individual can and should determine that answer.

As scores of Americans push back and give their opinions on social media, the government has admitted to colluding with Facebook to suppress what it deems “misinformation.” That’s even though much of the supposed “misinformation” may get found out as fact down the road. On Friday, July 16, President Joe Biden once again overstepped his boundaries. He accused Facebook of killing people over the company’s refusal or inability to remove all content that the president finds unacceptable.

Despite Facebook’s cooperation with the government to control millions of people’s free speech, Biden isn’t happy that the social media giant isn’t doing more to suppress the free speech of Americans who don’t want to get a COVID-19 vaccination. Biden outrageously accused Facebook of killing Americans who are unvaccinated.

Once again, the president’s rhetoric is reprehensible. Biden is the same guy who called former President Donald Trump irresponsible for his choice of words. It’s a pattern of recklessness Biden displays regularly. He repeatedly calls common-sense election reforms racist and resemblant of Jim Crow laws.

Regardless, what Biden said equates free speech with death. Not once did Biden try to convince Americans to get vaccinated or make the case of the effectiveness and safety of the vaccinations. Instead, he demagogues and ridicules unvaccinated people. Instead of earning a listening ear, he turns away unvaccinated people by insulting them.

Attempts to control speech by the government are not uncommon throughout the nation’s history. Since America’s founding, the government has tried to find ways to limit speech on what it considered noble grounds. Take, for example, the Sedition Act of 1798.

In 1928, Supreme Court Justice Louis Brandeis warned in Olmstead v. United States that Americans must be “on our guard to protect liberty” when the government appears to do something good. He added, “The greatest dangers to liberty lurk in insidious encroachment by men of zeal, well-meaning but without understanding.”

While Biden and the administration may believe their intentions are well-meaning, nothing justifies Biden’s rhetoric. The unvaccinated don’t want to die any more than someone who is vaccinated. Once again, instead of bringing America together, respecting boundaries, and empowering liberty over government over handedness, the president is dividing America more.

Perhaps there are good reasons many Americans aren’t getting vaccinated against COVID-19. Regardless, it’s their choice to make. It’s not the government’s call, and it’s a gross violation of the role of government.

Thomas Jefferson once wrote, “The purpose of government is to enable the people of a nation to live in safety and happiness.”