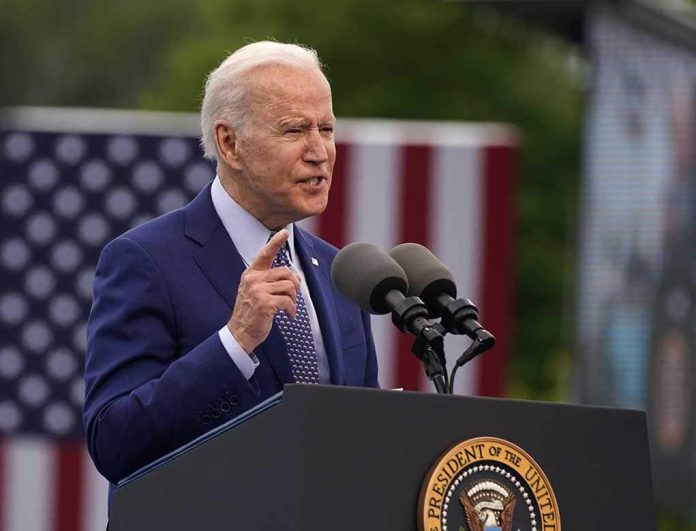 (RightWing.org) – It’s not often that a president comes along and develops a strategy of division to accomplish domestic policy goals. That appears to be precisely what President Joe Biden is doing. On Thursday, September 9, Biden announced his patience was wearing thin with those who remain unvaccinated against COVID-19. In response, he issued sweeping vaccine mandates and threatened the jobs of 80 million working Americans who have refused to vaccinate.

To accomplish the massive undertaking, the president will harness the power of the Occupational Safety and Health Administration (OSHA) to carry out his mandate. Biden is putting the burden on businesses to act as his mandate police or face crushing penalties. The blowback against the president was swift and severe, and the mandate could create significant political complications for a president already in disarray and a public wary of government mandates as they try to reclaim their lives.

Biden Goes to War Against Citizens, Not the Disease

In the opening salvo of Biden’s speech, he expressed his contempt and disgust for Americans who believed what he himself said nearly a year ago. The president and vice president may own some culpability in the vaccine crisis they created, but you’ll never hear the dynamic duo acknowledge it. On the campaign trail, both said they didn’t trust Donald Trump’s vaccine. It wasn’t a slip of the tongue, it was a clear message.

Regardless, Biden created a new front in his war on the unvaccinated. He purposely pitted Americans against one another. He said, “Many of us (who are vaccinated) are frustrated with the nearly 80 million Americans who are still not vaccinated.” He eviscerated the unvaccinated and treated citizens as though they were petulant children who needed a good spanking.

His tone was angry, and many wondered where that misplaced anger was when Afghanistan fell, 13 of our troops died, and the administration stranded Americans in the war-torn country. Of course, isn’t this a great time for a diversion from that as America remembers 9/11 twenty years later?

Biden genuinely believes dividing America through heated rhetoric is the way to get us to comply with his edicts. He fails to remember he’s a president, not a king. There are multiple layers to the nightmare Biden is creating and forcing on America.

First, there are the practical everyday issues of forcing businesses to become his vaccine police. Companies with over 100 employees must either force their employees to inoculate or get stuck with the costs of weekly testing. Non-compliance could cost businesses $14,000 per incident.

OSHA is the occupational safety agency. As such, this order could be legal, but it’s neither practical nor appropriate. The entire thing will become a legal mess, and attorneys familiar with employment law will begin the process of fighting the order — if they haven’t already. Ultimately, they’re the ones who will benefit the most. Who knows what legal twists and turns will follow. The Republican National Committee (RNC) is filing its own suit immediately.

Then there’s the employment problem as America tries to re-emerge from the pandemic shutdowns, skyrocketing inflation, and a huge number of unfulfilled job openings still hurting businesses. This order can only work to tighten an already struggling labor market and further hurt the economy. Complicating the matter, how will OSHA enforce this mandate? The overworked agency hardly has enough staffing to accomplish the massive feat. The small agency boasts a workforce of 1,850 inspectors who oversee 130 million workers employed at over 8 million worksites.

Get this… Biden’s mandate could hamper his enforcement agency. The president could fire millions of federal workers who refuse to immunize. He ought to be careful. The GOP might accuse him of reducing the size of the government, which is the largest employer in America.

Here’s the hypocrisy of it all… in December, Biden stated he was vehemently against mandates. Here we are, staring more and more of them down as the president continues his massive power grabs, many of which were deemed lawless by the courts.

Just a week ago, Biden, Democrats and the media went berserk at Texas’s new abortion law allowing citizens to file a lawsuit against those who provide or aid in most abortions in the state. Now, they want businesses and individuals to narc on each other to the federal government for non-compliance with Biden’s vaccine mandate.

Have no doubt, Biden’s division is intentional. He believes the only way to unite the country is to divide it.