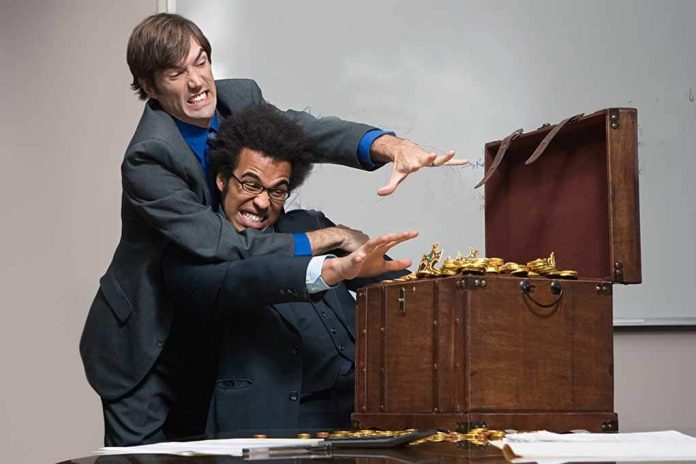 (RightWing.org) – Getting Congress to move on real work is like asking a donkey to prepare for the Kentucky Derby. Every year, like clockwork, Congress must come together in the summer and fall to increase the debt limit and begin the process of passing a federal budget for the new fiscal year that starts on October 1.

On Wednesday, August 4, Senate Minority Leader Mitch McConnell (R-KY) fired a cannon over the Democrat’s bow. A battle is brewing, but Democrats aren’t paying much attention to it as they try to pass a massive $3.5 trillion partisan reconciliation bill that is more reckless than an Evil Knievel jump. McConnell is sending warnings that the GOP has options to control the Democrats’ reckless agenda, and Republicans intend to use them to their advantage.

Senate Republicans appear intent to move on from infrastructure talks as they head to browner pastures (the other side is far from greener right now). The bipartisan group of Senators wrote their bill, and what’s left is some general haranguing over specifics that could prevent the legislation from passing in the upper chamber.

In the House, Speaker Nancy Pelosi (D-CA) says the bipartisan deal won’t get a vote unless the Senate passes a partisan reconciliation bill. If that’s the case, neither bill may make it into law because moderate Sen. Kyrsten Sinema (D-AZ) declared she’s voting “no.” Sens. Joe Manchin (D-WV) and Jon Tester (D-MT) signal they may not be for it, either.

So, as the Democrats spin their wheels in the mud, McConnell is alerting them that time is being wasted. If Democrats’ attempts at infrastructure fail, the minority leader is making it clear: don’t try to slip any of it into debt reduction or the 2022-2023 federal budget.

On Wednesday, McConnell stated that he couldn’t see a scenario where a single Republican would vote to increase the national debt. Almost immediately, Democrats cried foul and whined about the GOP’s spending during the Trump years.

Where McConnell’s concerned, the previous spending isn’t the current issue. The Democrats’ future spending is the problem, and there’s always more than one way to skin a cat. The minority leader’s statement could be a tactical negotiation tool that McConnell is employing against the Democrats’ massive spending proposals intended to transform America.

If the Democrats pass their massive, inflation-busting reconciliation bill, how will they pay for it if the money isn’t in the bank or on the nation’s credit card? That’s the point of McConnell’s threat. If the Treasury Department can’t borrow money, the legislation goes up in smoke.

It’s a political way of reminding Democrats they may be in the majority, albeit only because of the vice president’s vote but the GOP is not out of the game. There are other ways to put pressure on the Left, and no one is better at holding their poker cards close to the chest than McConnell.

Separate from the national debt limit, the federal budget is another massive yearly undertaking by Congress. Lawmakers generally agree on the majority of the funding from year to year. However, this time there are new sticking points thanks to the Democrat’s radical agenda.

Taking a shot at the Democrat’s priorities one more time, McConnell warned that any spending agreement must include proper military funding and exclude the Left’s agenda.

Once again, things could fall into place for McConnell. He could leverage a government closure to force Democrats to capitulate or expose any part of their reckless agenda that finds its way into the budget to the public. In recent years, government shutdowns haven’t negatively impacted voter decisions the way they did in years past.

In the days and weeks ahead, it’s going to get interesting to see if the GOP can force the Democrats to back off some of their extreme agenda. That’s doubtful. What isn’t are Republican efforts to slow them down until help arrives in 2022. That is unless the Democrats destroy their legislation over infighting.

Stay tuned. This story isn’t close to being finished.