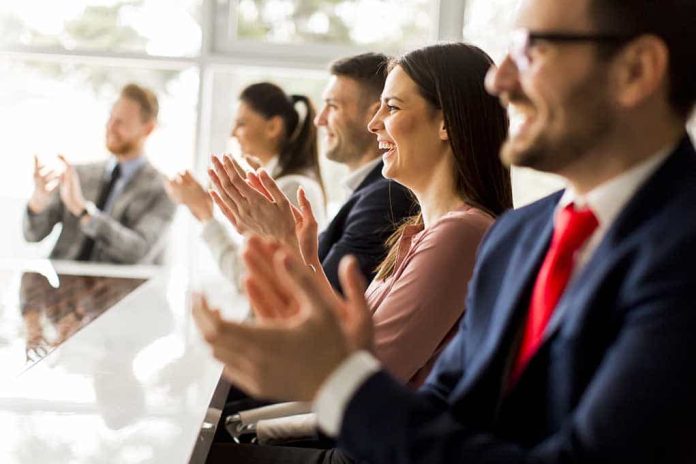 (RightWing.org) – On Wednesday, June 9, a bipartisan group of Senators hammered out a deal to improve America’s aging infrastructure. For weeks, President Joe Biden attempted to get Republicans on board with his aggressive far-left infrastructure agenda. The president claimed he wanted a bipartisan solution, but refused to budge on items such as free college, healthcare, and green energy initiatives. The GOP says that “human infrastructure is not infrastructure, but a hijacking of legislation using language Americans approve of and are familiar with.”

Since Biden’s first $2.3 trillion infrastructure proposal in April, it’s come down by more than half as the president and Congressional Democrats fail to get a key moderate Democratic Senator to agree to a partisan agenda. It appears that despite not being the majority party in either the House or Senate, albeit on the narrowest of margins, Republicans are united and in the driver’s seat. Democrats may be forced to negotiate a bipartisan deal or risk getting nothing at all.

Is the Infrastructure Deal Collapsing?

Democrats are in a major jam if they hope to pass any semblance of an infrastructure bill. On the Hill, congressional staffers believe a scaled-down bill will likely pass. However, beyond that, staffers for both parties overwhelmingly agree there won’t be much that Democrats get done beyond infrastructure.

That doesn’t mean things can’t go south fast. The bipartisan solution agreed to last week stripped much, if not all, of the Democrat’s leftist wishlist in the infrastructure proposal. However, on Sunday, June 13, House Speaker Nancy Pelosi (D-NY) said that Democrats would not back down on Biden’s agenda. That could create a significant challenge to a bipartisan proposal that would cost $974 million over 5 years. Pelosi said it would be nearly impossible to pass without assurances that more bills are coming to fulfill the Left’s agenda.

The bipartisan plan includes no human infrastructure, as Democrats like to call it. Sen. Susan Collins (R-ME) says the new deal sticks to traditional infrastructure items like roads and bridges. That leaves far-left lawmakers balking. Rep. Alexandria Ocasio-Cortez (D-NY) is signaling her unhappiness and is likely to vote against such legislation. As she goes, so does much of the Left.

Biden is encouraging Democrats to pass infrastructure using reconciliation. However, moderate Democratic Sen. Joe Manchin (D-WV) repeatedly says he wants a bipartisan bill and won’t support a partisan solution. If Manchin were to signal support for using reconciliation, the political pressure from the deep red state of West Virginia could be overwhelming and signal the end of his political career come re-election in 2024.

Democrats are stuck between a rock and a hard place. On the one hand, Pelosi says she’s going full throttle to pass the Left’s agenda in the House. She can do that. Her problem is the lack of recognition of what can practically pass in the Senate.

It could come down to Congress getting something instead of nothing. That will entirely depend on the Democrats. In either case, it’s a huge win for the GOP. Plus, it’s likely the last big thing Democrats can pass before the 2022 midterm elections, according to congressional staffers intimate with the realities of passing legislation.

It appears that the GOP has the upper hand and Democrats are stuck between a rock and hard spot only six months into their razor-thin majority.