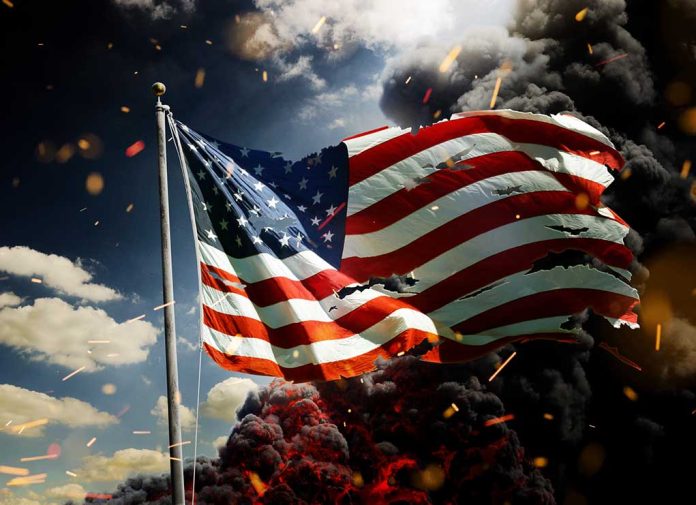 (RightWing.org) – America is getting swallowed by an avalanche, and our leaders are digging in the wrong direction. We live in a world where facts are subjective. Yet, facts are supposed to be facts, whether they are agreed upon or not. Unfortunately, too many tell us the world isn’t around, and too many believe it.

Enter the political world of narratives. A political narrative is an assumption widely agreed upon as a fact, whether it is or not. It’s grown into a form of manipulation to get the public to accept what it wants us to accept in order to achieve a political agenda. The result is a divided America, and it’s destroying the country.

False narratives are eroding liberties, jobs, families, and schools. Instead of identifying what’s happening, Americans are turning against one another as some buy into the Left’s false narratives.

The Left is Using Narratives to Stamp Out Opposition

It’s important to take what the Left is saying with deep skepticism. Their goal is not to offer solutions to America’s problems. It’s to seize more power.

Consider the following. In March 2020, America was told if it didn’t lock down, millions of Americans would die by the summer due to COVID-19. They told us the only way to prevent that many from dying in just a few short months was to shut down businesses and stay home. One year later, it’s half that number.

The narrative turned out to be wrong. In the process, religious liberties were harshly suspended, people’s livelihoods were threatened, and America is in the midst of a national debt-crushing, government-induced crisis. We’re told the solution must come from the people who created the problem.

Unfortunately, it doesn’t end there.

America has long hailed the police as heroes and community servants. However, in one instance, it all changed. George Floyd’s death while in police custody sparked a national outcry against America’s protectors.

The police were widely denounced as racist, and they took center stage in the fight against social injustice. Suddenly, a few bad cops represented all cops. The police were accused of hunting down black people for their skin color. As a result of big liberal cities defunding police efforts, crime spiked without accountability. Now, in George Floyd’s hometown of Minneapolis, there are cries to re-fund the police as the city council adds $6.4 million to their budget to hire more police after defunding them last fall.

Despite saying for nearly a year that Donald Trump wasn’t following the science, which wasn’t true, Democrats and teacher unions are ignoring the science and keeping schools closed across the country until teachers are vaccinated. However, the CDC claims that vaccinations for teachers are not needed because of scientific evidence that kids are not spreading COVID-19 in schools.

In the meantime, many kids are falling farther and farther behind in their education. Not only are they becoming victims, but so is America’s future as young people are ill-equipped to face an evolving workforce.

It’s Time to Be Bold

Narratives can be incredibly helpful and good to contrast views, ideas, and agendas. However, when used to silence opposition and intimidate people, it’s highly destructive to a society built on free speech. It’s not popular to speak out against social justice, teachers, or get caught up in accusations that you don’t care about people dying from COVID-19.

Conservatives must be bold, strong, and highly-informed if we’re to overcome the emotional onslaught from the left. Riding out a news cycle or accepting it for what it is won’t work anymore. The last year changed everything.

We all need to be a part of setting the narrative instead of being consumed by it.