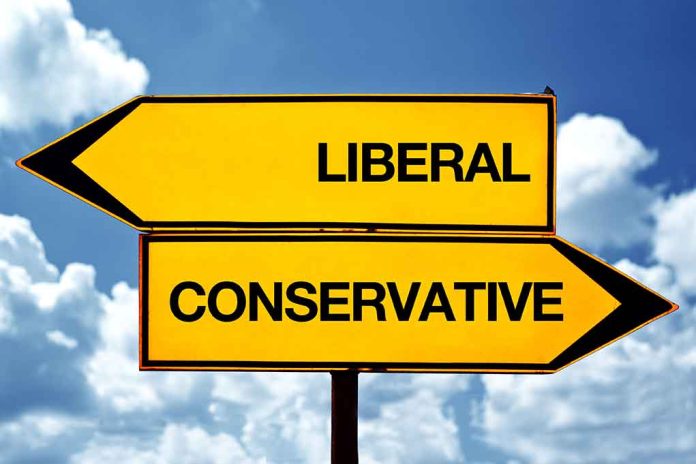 (RightWing.org) – Over the last 50 years, there has been a shift in how Americans view one another in society. Some argue that as Democrats move progressively more liberal from one decade to the next, Republicans ultimately follow. It’s true that the GOP of 2022 doesn’t share the same brand of conservatism as they did in 2000 or 1980. Is that necessarily a bad thing? It depends.

Americans have always had a strong streak of independence. It’s one reason people came to the colonies searching for a new life. It’s why people pioneered westward despite great dangers. From the abolition of slavery to the women’s suffrage movement in the early 1900s, to civil rights for black and gay Americans – is it really liberalism that moved America, or was it something else?

According to a new New York University (NYU) survey conducted between 1972 and 2018, Americans have become more liberal over the last 50 years in their attitudes and behavior. Yet, on key political issues, they remain more conservative. However, is liberalism really influencing people, or is it possible that society is maturing and it has nothing to do with liberalism?

For example, is it liberal to treat one another with dignity and respect regardless of the color of one’s skin? Perhaps there’s still more to be done to level the playing field in a legal sense. That may always be true. However, it’s challenging to legislate morality.

The NYU survey paints this picture from generations born in the late 1800s to 2000. It demonstrates that there is a big difference between society maturing, people embracing their shared humanity through dignity and respect, and abandoning the good things that made America great. That seems to be the political challenge of our time.

Perhaps that was the point that Donald Trump made in 2016 and that the GOP is embracing heading into 2022 and 2024? Could it also explain why peoples’ attitudes may be more liberal, but many continue to vote more conservatively?

Perhaps America needs to redefine the term “liberal” or use the word more carefully. In today’s sense, it means something very different than progressive or socialist. While attitudes and behavior may be changing, others aren’t, such as holding to the US Constitution. The survey said that many segmentations within their survey remained steadfastly conservative regarding abortion rights, healthcare, gun ownership, and limited government regulations.

This makes some sense when considering the independent streak in Americans. When it comes to sexuality, political identities, and gender roles, they are mainly private issues. Even political candidates tend to avoid topics viewed as largely personal matters. It’s partially what got Virginia Democratic gubernatorial candidate Terry McAuliffe in trouble when he stated parents didn’t have a right to know what teachers taught their children in school.

The study concludes that some of the most significant changes affecting America’s beliefs and behaviors have nothing to do with politics. It cites reduced newspaper readership as an example. Other examples could include television viewership, the internet, and now the COVID-19 pandemic. Americans are redefining their views and behaviors. Some are waking up to the flaws of the government’s abilities to make their lives better or protect them.

That could be why many people continue to embrace conservatism, or elements of it.

What will 2022 bring? Will America vote for Republicans in historic numbers this November?

The signs are pointing that way.