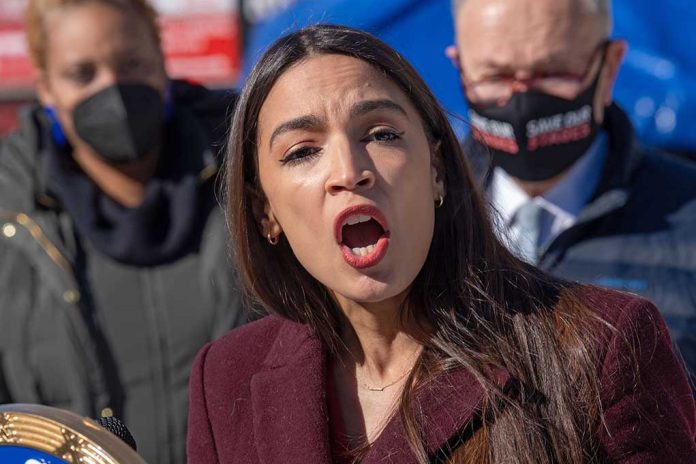 Tables TURN On Ocasio-Cortez – Look How She Reacted

(RightWing.org) – A radical Democrat congresswoman is complaining that she was heckled on the steps of the Capitol. It’s deeply ironic that she’s suddenly so opposed to harassment in politics. Less than a week earlier, she ridiculed a Supreme Court justice after he was harassed by leftists in a restaurant.

Funny how AOC is suddenly against the harassment of public officials when it relates to her, but is perfectly fine with it when it's aimed at someone she doesn't like.

Harassment of ANY kind is unacceptable. https://t.co/CB3QtPdYqB

In a July 14 tweet, Representative Alexandria Ocasio-Cortez (D-NY) complained that she’d suffered “a deeply disgusting incident” that day on the Capitol steps. The controversial lawmaker said the heckler was “seeking extremist fame” and criticized Congress for allowing it to happen.

In the incident AOC was referring to, conservative comedian Alex Stein taunted her over her opposition to the recent Supreme Court decision revoking Roe v. Wade. Stein later posted a video on social media, and thanked her for helping him trend.

On July 8, Associate Justice Brett Kavanaugh was forced to leave a Washington, DC, restaurant after he was harassed by left-wing protesters. AOC’s response to this instance of harassment was a mocking and factually inaccurate tweet that defended the protesters and insulted Kavanaugh. Early last month, a California man sought to murder Kavanaugh at his home after the draft Roe v. Wade decision was leaked to the press.

Poor guy. He left before his soufflé because he decided half the country should risk death if they have an ectopic pregnancy within the wrong state lines. It’s all very unfair to him.

It seems AOC sees harassment of Republicans as all part of the fun of politics — but when she faces some mild heckling, she hypocritically labels it as disgusting extremism.