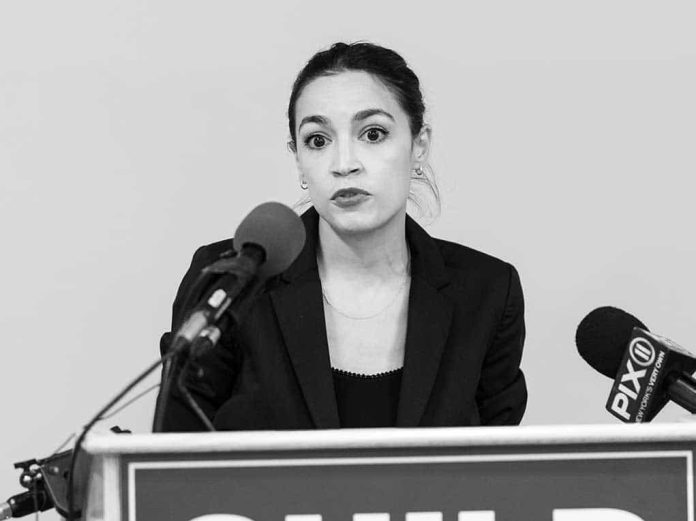 (RightWing.org) – Masks have been a great opportunity for the American Left. With leading Republicans standing up for freedom and individual responsibility, Democrats have gleefully jumped on the mask bandwagon. Go out in public bare-faced and you risk being verbally attacked for your irresponsibility. The thing is, though, Dems don’t actually like wearing masks, either…

AOC joins in on the DC mask theater for a photo op, only to remove it as soon as the camera is down. pic.twitter.com/cRQwE6yy9U

On August 4, loudmouth Representative Alexandria Ocasio-Cortez (D-NY) met a group of young activists outside the Capitol. Video of the event shows an organizer announcing a photo opportunity with the radical legislator, and members of the group – including AOC – immediately pulled out masks and put them on. Then, as soon as the photo had been taken, they took them off again.

AOC is actually a serial offender when it comes to mask-wearing. There are photos of her walking around inside the Capitol — where House Speaker Nancy Pelosi (D-CA) enforces a draconian mask mandate — with her mask in her hand. You won’t see those photos in the mainstream media, of course; they only attack Republican politicians for going unmasked. The evidence is there, though. Whether she’s walking through the Capitol talking to someone or posing outside in a dense crowd of dozens of people, AOC only wears a mask when she knows a camera is pointing her way.

This pandemic theater shows that, to Democrats, masks aren’t really the life-saving medical devices they claim they are. Instead, they’re just an issue that can be used to divide America even more than it already is. It’s cynical, it’s destructive, and it’s typically Democrat.