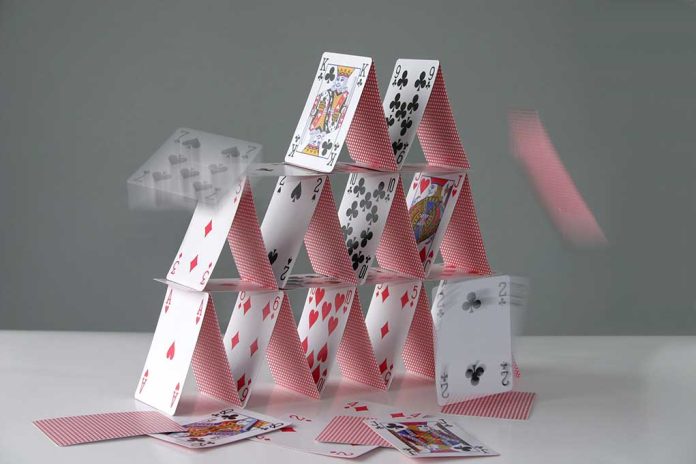 (RightWing.org) – In early 2021, Democrats assumed control of Congress and the White House. The atmosphere was giddy, exciting, and hopeful for the Left as it prepared to finish the job that former President Barack Obama started in 2009. Unfortunately for Democrats, Obama couldn’t accomplish his goals thanks to Republicans who stood up to his agenda and blocked it stone cold.

Fast forward to January 2022, and Democrats are in much the same position – except this time, they need to persuade a few in their own party to go along with their extreme agenda. The radical semi-social Build Back Better proposal is dead thanks to Democratic, moderate Sen. Joe Manchin (D-WV). Now, Democrats want to return to voting rights. To pass it, they need to amend the Senate rules to either carve out or eliminate the filibuster to get around the GOP. Once again, Manchin stands in their way.

It Wasn’t Supposed to Be This Way

Things weren’t supposed to be this difficult for the Left. Democrats have the majority in the House and Senate. However, razor-thin majorities are more challenging to navigate than being in the minority. The majority party sets the agenda, but there’s a problem. In the House, there is only a few vote advantage for Democrats, and in the Senate, it’s an evenly split chamber, and 60 votes are needed to advance almost all legislation. Unless every Democrat is on board with the Left’s agenda, it’s dead in the water.

Democrats can’t point to the GOP as obstructionists. If they did, it wouldn’t be a bad label. It would be a badge of honor for Republicans to say they were the party that stood up for America and the Constitution. It’s a debate worth having come election time, and voters are likely to agree with Republicans after they continue to learn of the proposals Democrats devised in 2021 — the ones Manchin killed in December.

On Monday, January 4, the West Virginia senator sent shockwaves across the Democratic caucus. While Senate Majority Leader Chuck Schumer (D-NY) continues to sound like a bold leader with ambitious plans, he keeps getting rebuffed. It’s not a good look for someone who made six months of promises with notes of optimism that Build Back Better would pass at any moment. That was never true.

Now that Build Back Better is dead, Democrats want to return to voter rights legislation. The partisan grab at federalizing elections and stripping states of their own voter reform laws in the wake of the disastrous 2020 presidential election has already failed numerous times in the Senate due to Manchin. The only way the Democrats can push their agenda is if the filibuster is reformed.

On Monday, Manchin proposed minor changes to the filibuster, but it doesn’t erode the 60 vote threshold to pass legislation. The moderate Senator said that using the nuclear option to bypass the minority party was “very, very difficult.” Manchin wants bipartisan buy-in from Republicans before agreeing to a rule change, and the GOP isn’t budging in opposition.

Senate Minority Leader Mitch McConnell (R-KY) rebuffed Democratic claims that GOP state election laws harm voters. In fact, it’s just the opposite. The states made it easier to vote and harder to cheat in elections. McConnell said a rule change to the filibuster was the first step in opening the door that would allow Democrats to not only pack the US Supreme Court (SCOTUS). It would grant statehood to Washington, DC, and Puerto Rico so they could add to their numbers in Congress.

McConnell said the 60-vote threshold was an excuse by Democrats to break the Senate, which has successfully created balance and stability in government since the mid-1800s. The senate minority leader added that the Democrats’ aim is a genuine radical attempt to fundamentally change America.

The Democratic Agenda Is About the 2022 Election – Not Passing Legislation

Does Manchin see and agree with McConnell’s assessment? That may be the case. Last summer, he said he wasn’t a liberal, and if Democrats were intent on pushing through far-left legislation he couldn’t agree with, they needed to elect more Progressives and Socialists to make his vote not count.

It appears that Manchin is sincere, but Democrats still refuse to listen after a year of consistency from the centrist senator. They know the filibuster and their hostile takeover of elections is futile. This isn’t about legislation; this is about campaigning. Republican voters are energized, and Democrats aren’t so enthused.

That is the game in 2022 – can Democrats tick off enough in their party to come out and vote? An angry base is a good voter base. Don’t count on it — some Democrats, and many Independents, aren’t on board with the Left.

Welcome to the kickoff of the 2022 election season.